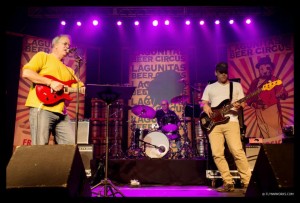 Alice Drinks The Kool Aid is a Blues Based Chicago Indie Rock band founded in a Park Ridge basement in 2014 as a creative outlet for three life long musician friends. The drummer Jim Widlowski is a top session player in the city who has anchored many of the Broadway productions that have come to the city in the past 20 years. The bassist Alan Berliant is a peerless performer who makes his living as a composer of commercial music of all styles. Tony Magee, the founder of Lagunitas Brewing Company manages the guitar and vocal responsibilities. The band’s original material is written and arranged by all three members in congress and draw from the deepest free Jazz and the most fundamental Rock and Blues.
Engineer / Producer Chris Steinmetz says,“ This band is a groove oriented bastion of talent, musicianship and great songs. These three guys have instincts, imagination, and history… and it definitely shows. With the flawless, intricate time of drummer Jim Widlowski to the vibrant melodic bass lines of Alan Berliant, one is taken on a wild ride driven masterfully by singer/ guitarist Tony Magee. Tony has a voice that draws you in. His ability to perk up your ears while engaging you in the lyrics was apparent to me from the first listen. He truly brings his multi-faceted background to each performance. I am a big fan of his songwriting. He is an elusive word smith with the skills and ability to connect emotionally powerful lyrics with colorful melodic phrases”.
Since Forming in 2014, the band has performed on some of Chicago’s most renowned stages such as House of Blues, Livewire, Lagunitas Beer Circus and Hide Out.

Alice Drinks The Kool Aid plans to go on tour in 2015 and play festivals, clubs, bars, and open for some well-known headliners. Their mission is to share their music nationwide with people who love music performed by people who feel the same!