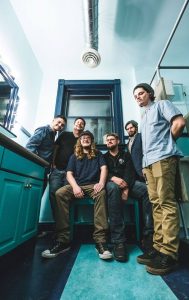 Since their first show in late 2012, a major buzz about the band Frogleg has been spreading through the music scene stemming from their ever-growing weekly tradition, “Frogleg Thursdays @ Bunkers” in downtown Minneapolis. After four years, Frogleg closed the book on that chapter of their musical path. Their send off from Bunker’s was met with a series of sold out appearances at the club counting down to the final show.

Since departing from their home gig, the band has headlined shows at most of the major venues in Minneapolis from the Cabooze to the Skyway Theatre downtown as well as an appearance on the First Avenue mainroom stage. Outside of Minneapolis, Frogleg has expanded their touring circuit considerably, now including many of the friendly mountain states as well as the greater Midwest. Frogleg has shared the stage with Steven Tyler, Jeff Austin Band, New Orleans Suspects, Devon Allman, Orgone, Raw Oyster Cult, Samantha Fish, Allie Kral, Robert Randolph and has played multiple dates with Melvin Seals and the Jerry Garcia Band.

Known for their songwriting and improvisational live performances, Frogleg would be best described as a soul band, as their influences are not drawn from one specific genre. A typical Frogleg show usually features a unique blend of Funk, Reggae, Rock and Jazz exploration.

Frogleg’s debut, self-titled album, released in April of 2015, first pressing sold out in under six months. The band followed up in 2017 with the release of ‘Busy Checking In’. The release show was met with much excitement pairing Frogleg with George Porter Jr. and Jon Cleary on the beautiful Como Dockside Pavilion. The album is seeing lots of attention from national radio, charting on stations from California to New York! The band followed up their release by pressing the album to a double vinyl and adding on some bonus live tracks from an in studio radio performance. The vinyl release show quickly sold out – something that Frogleg seems to be making a habit of. Do yourself a favor and go see a Frogleg show!