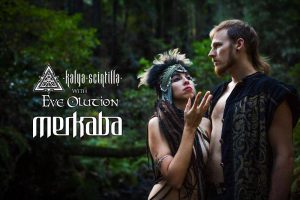 Australian Music Producer and Founder of Merkaba Music, Kalya (Ka –lee- yah) Scintilla ( Sin–till –ah) has always had a love for music; playing in garage bands, banging on drum kits, spinning vinyl in the night clubs of Sydney and getting down to funk! Kalya had a knowing one night listening to one of the most profound pieces of visionary music from the legendary Herbie Hancock, that his soul’s mission was to make music his life’s devotion. Soon after this experience he enrolled himself into a two year audio engineering course and eventually left the city to work on music in the country deep into nature. Taking on small part time jobs to get him by, he made his sole focus and time dedicated to honing his craft. He signed on with Zenon records in 2009 putting him on the map inside the psy-trance world with his first project, Merkaba. His second project, Kalya Scintilla made it to the top ten on Addictech charts in the same year and by 2011 he was touring the U.S. west coast. Kalya Scintilla took hold in the United States as dance floors were all a buzz about the masterful style in which Kalya was throwing down squelchy funky grooves that were uniquely deep and hypnotic. In 2012 he began collaborating with artist Eve Olution inside the album Open Ancient Eyes. New elements took root as these two worked in the studio to add detailed nuances to weave the current mythos of our time within the music. This album is the first of three inside a trilogy dedicated to our human journey, this planet, and our connection to creation itself. Today both Kalya Scintilla and Merkaba are renowned throughout almost every continent on the planet and the popularity of both projects are growing as more & more people are connected with the deep seeded intention of every song.