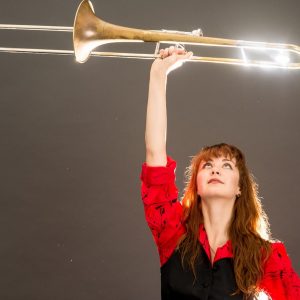 Possessing a voice as cool and crystalline as an Alpine stream, Natalie Cressman is a rising singer/songwriter and trombonist who draws inspiration from a vast array of deep and powerful musical currents. Her new EP five-song EP Traces reveals her latest evolution, a sleek and sensuous electronica-laced sound with even a trace or two of dance floor sweat.

Steadily evolving in many directions, the 25-year-old Cressman has already put down deep roots in several overlapping scenes. A prodigiously talented New York City-based trombonist, she’s spent the past seven years touring the jam band circuit as a horn player and vocalist with Phish’s Trey Anastasio (and recently played with Phish at Madison Square Garden). Deeply versed in Latin jazz, post-bop, pop, and Brazilian music, she tapped the interlaced traditions on her first two solo albums, 2012’s Unfolding and 2014’s Turn the Sea.

The Traces EP follows on the heels of 2016’s Etchings in Amber, a gorgeous duo album with guitarist Mike Bono that introduced Cressman as a formidable musical force without her horn. While the project focuses on songs featuring lyrics she wrote for several Bono compositions, Cressman also wrote words and music for three of her songs, contributing to the atmospheric suite of jazz-inflected, genre-bending tunes.

With Traces, Cressman expands her creative reach into post-production, meticulously crafting soundscaped tracks inspired by R&B singer/songwriter Emily King, the Prince-championed vocal trio KING, and particularly Australian avant-soul quartet Hiatus Kaiyote. “Hearing their music was an epiphany moment,” says Cressman, who was born and raised in San Francisco. “They create music that’s layered and complex and appeals to a dance crowd. That’s not exactly what I’m doing, but hearing a live band with a lot of structure on the sonic side of things helped point the way as I’m trying to add this other layer to what I’m doing with my songwriting.” When she’s not performing her own music, Cressman can be found collaborating with some of the most illustrious figures in rock, funk, jazz and beyond. In addition to her regular gig with Trey Anastasio she plays regularly with the nu-disco Escort. Just in the past year or so, Cressman played with Colorado livetronica hip-hop combo Big Gigantic at Red Rocks (while contributing lead vocals on “No Apologies” from the album Brighter Future), joined with the horn-laden funk band The Motet for a series of concerts around the country, and performed at Brooklyn Bowl Vegas with Umphrey’s McGee. Her passion for groove music hasn’t diluted her love of jazz. In 2016 SFJAZZ commissioned her to develop music for a concert celebrating the legacy of jazz trombonist/arranger Melba Liston, and she performed with Israeli reed star Anat Cohen. She also continued her long-standing musical relationship with world jazz innovator Peter Apfelbaum, performing with his band Sparkler. A fellow Bay Area native, Apfelbaum has hired Cressman since she was a young teen, a relationship that exemplifies the creative hothouse in which she was raised.

Her mother, Sandy Cressman, is a jazz vocalist who immersed herself deeply into the traditions of Brazilian music, collaborating with many of Brazil’s most respected musicians. Her father, Jeff Cressman, is a recording engineer and trombonist who recently concluded a two-decade run with Santana. Natalie quite naturally began studying trombone with her father, but set out to be a dancer rather than a musician. An aspiring ballet dancer until her junior year of high school, she changed courses when an injury sidelined her dance aspirations. Her parents provided entrée to a number of enviable opportunities, but Cressman’s own prodigious gifts continued to merit her presence in any number of high-profile settings. She soon found herself playing salsa with Uruguayan percussionist Edgardo Cambon e Orquesta Candela, Latin jazz with Pete Escovedo’s Latin Jazz Orchestra, world music with Jai Uttal and the Pagan Love Orchestra, and globally-inspired avant-garde jazz with multi-instrumentalist Peter Apfelbaum, a close family friend.

Cressman traveled east in 2009 to study at the Manhattan School of Music, and the following year jam band pioneer Trey Anastasio recruited her for his touring band. He met Cressman at 18, and “was instantly floored by how melodically and naturally she played and sang,” Anastasio says. “Natalie is the rarest of musicians. Born into a musical family and raised in a home filled with the sounds of Brazilian music, jazz and Afro-Cuban rhythms, musicality is in her DNA.” Her far flung musical passions continue to bear new fruit, as her identity as a horn player and a singer/songwriter evolve in different directions. Playing funk trombone in arenas and cavernous theaters has required developing an aggressive new vocabulary of shouts, growls, smears and yelps, a la the JB Horns’ Fred Wesley. Her vocal work in increasingly intimate and rhythmically insinuating settings has revealed an artist who can thrive in any setting, from raucous, reverberant halls to packed and pulsing lofts and nightclubs. In an epoch marked by infinite musical possibilities, Natalie Cressman is a singular force who draws from an improbable breadth of sonic realms.