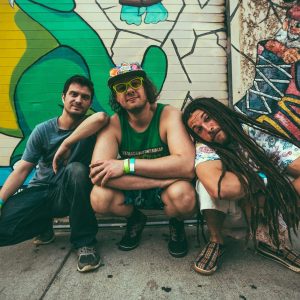 3-piece powerhouse Vibe & Direct is an ever-evolving musical fusion, landing somewhere on the spectrum between rock, dance and electronic music. The trio performs with a rhythmic pulse, known for their dynamic dance parties and smiling faces. The boys released their debut EP – Psychadelevator – in 2013, followed by their second EP – Lavish Peasant – in October of 2015. They released their first full-length album – Chrysanthemum – in February of 2017.

With a sound that is driven by their primitive bond, the boys spend most of their time deep in jam, and touring the US in the salmon can. Consistently traveling throughout the Northeast, Midwest, East Coast, and Southeast, Vibe has made stops at festivals like Rootwire, Mad Tea Party Jam, Domefest, and the Werkout. Living lucky enough to spread their sounds near and far, the trio chases everyday with their eyes on he horizon.