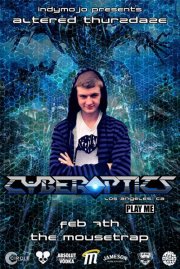 Indymojo.com and G-9 Collective are proud to bring back the 1st national headliner ever to play Altered Thurzdaze, as well as an Indy favorite, as we celebrate quite a few Aquarius Birthdaze!…

A young producer taking the dubstep world by storm, at age 19 Alex Epps aka Cyberoptics first made his big smash into the scene with his release “Geisha” on PLAY ME Records. Released in May of 2010, Geisha climbed to number 1 on Beatport.com and held it’s place in the top 5 for over a month, battling producers such as Borgore and Doctor P.

Hailing from Memphis TN, with hopes of one day producing
music for movies or video-games; and reeling off of recent sucess of the use of his remix of “Chrispy – Predator” in the official “Battleship” trailer from director Michael Bay, Cyberoptics is greatly influenced by pretty much every musical genre under the sun. With a unique style of different themes, deep sludge bass, heavy sub, and one of-a-kind cosmic soundscapes, it’s almost impossible not to move your body to these alien sounding bass tones!

‘Cyberoptics’ 2nd release from Play Me Records “The Tie Fighter EP” exploded onto the Beatport top 20 with songs “Pimpin” hitting #3 “Geisha VIP” right behind at #4 and “Tie Fighter” and “Toasty” topping out at 14 and
17. Cyber’s unique style is constantly changing, Expanding and evolving more with every song and spark of inspiration.

Currently Cyberoptics is hard at work on a full length album, touring with Play Me heroes Reid Speed & FS, and working closely with other producers such as Liquid Stranger, D-Jahsta, Adroa, Numbernin6 and Current Value.

In spare time, Cyber has a side-project known as “Embryon” consisting of himself and close friend Jordan Bolin, under which he produces a more ambient sound.

Support from: (All Aquarius Birthday Ninjas)