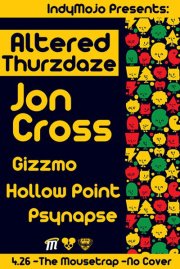 Indymojo.com and G-9 Collective are proud to bring you your weekly dose of bass music….

J. Cross became interested in jungle/drum and bass as a teen, during the summer of 1996. Over the next few years, his taste for the music flourished, as he transformed from a mere fan, to a well rounded DJ. Playing the music piqued his interest in production, as J. began making music in 1999. To this day, his interest has not wavered; his passion for drum and bass extends from private sessions in his bedroom to the hottest dancefloors, exclusive podcasts & mistapes, and broadcasts on radio stations around the globe. He represents M.I.A. (www.miachicago.com) – a collaboration of highly touted, strictly drum and bass DJ’s and producers; Future-DNB (www.futurednb.net) – one of the UK’s largest and most respected drum and bass websites; and SUBterror (www.subterror.com) – Indianapolis’ original purveyor of dancefloor destruction.

With local support from: