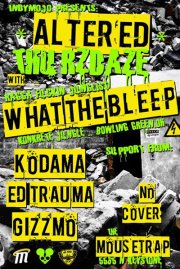 The “track record” type facts about What the Bleep are notable, but not what make him unique; he is no ordinary junglist. If you really want to know What the Bleep, you have to know these four things: [1] What the Bleep is an unfaltering ambassador of ragga jungle. From old skool vocal-heavy ragga to dubwise drum & bass to atmospheric jungle classics to new skool amen business to cutting edge dub-influenced halfstep jungle, he covers all the variations. He captures the unique emotion of ragga vocalisms juxtaposed over jungle rhythms perfectly. [2] What the Bleep is devoted to vinyl, playing all-vinyl sets regularly, with very few exceptions. And he uses vinyl to be able to control tracks with precision, recently dabbling in the realm of 3-turntable sets and turntablism. [3] What the Bleep is a humble junglist. He has set aside ego and self-interest, focusing on jungle music and its surrounding culture. He represents a music culture and way of life that is much bigger than himself. [4] What the Bleep is a soldier. As a mentality and not militantly. He is passionate and idealistic, yet he understands the necessity of joining the army of the like-minded. His ammunition is jungle, his weapon is mixing, and his battlefield is everyday life.

All of this has been manifested in a number of ways. In 2005, What the Bleep founded Electronic Enlightenment, a family of DJs and an MC who are trying to reinstate positive values in the electronic music scene. Annually since 2006, he has joined forces with long-time DJ partner, foi oi oi, to craft the acclaimed Feelings for Detroit mix series, with the latest edition being released at this year’s Movement (aka Detroit Electronic Music Festival). Since 2007, he has hosted a weekly Internet radio show “Selection of a Soldier” on jungletrain.net, now every Sunday from 5-7pm Eastern. Most notably in 2010, he launched the monthly Konkrete Jungle Bowling Green series, an official chapter of the international chapter-based movement, setting a new standard for bass culture events in the Midwest and putting Bowling Green on the map. And now he travels constantly to share his love for ragga jungle with wide varieties of crowds all over the country.

So, if you are going to hear What the Bleep touch down on a pair of turntables, be prepared. You will experience superbly mixed, unique ragga jungle sounds from an impressive vinyl collection, offering a fresh vibe on the dancefloor. And if you watch and listen carefully, you’ll come to realize that he not only can hold his own as a performer, but What the Bleep also embodies a more responsible and conscious role as a DJ that is rare to find. Your expectations of a DJ will be forever changed.