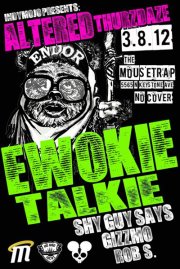 Ewokietalkie was originally an alias created in a basement by himself and a fellow music maker in 2007. On that particular night, it was one of the first music making sessions in which repetition and soundscape were the two main components for the music making process. Since then, ewok has been exercising the art of sound collage to bring his own twist on electronic music that is chalk full of dreamy textures, thumping drum loops, and warm bass.