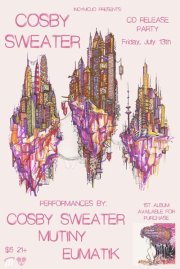 Join us as we celebrate the release of Live Electronic Super Trio – “Cosby Sweater’s first album!

Cosby Sweater is a new and vibrant voice in electronic music. The group is comprised of David Embry (DJ Embry-O, Embryonic Fluid) on production and vocals, Nicholas Gerlach (The Twin Cats) on Tenor Saxophone and EWI and Richard “Sleepy” Floyd (The Native Sun) on drums. Their strength lies in their high energy live shows and genre bending tracks. Cosby Sweater is already gaining momentum after just a few live shows.

With nearly 10 years of DJ experience, Kodama’s musical preference has touched all spectrums of electronic music. Performing under a life-long nickname, Kodama embodies the exuberant and jovial tendencies of the mythical tree spirits he shares a title with. These characteristics, paired with a healthy dabbling in many sub-genres of electronic music, come together to produce an invigorating symphony of sound. / / / Hollow Point is making moves and rising through the ranks of Indianapolis’s elite bass-heavy DJs. His style makes sure to keep the audience moving with thick basslines and he always has something for everyone. Now teamed up with Indymojo/G-9, the sky’s the limit for this dancefloor-friendly DJ. Catch him every week on his online radio show, Wednesday nights at 9pm ET hosted by www.boost.fm

Eumatik is a living, trance-inducing, funk-blasting, dance mechanism that stimulates the mind by being harmonically innovative and experimental, yet easily accessible in the conventions of modern electronica. What makes their approach to music so interesting is their ability to allure the listener with catchy hooks, slowly lead them outside their accustomed musical boundaries by means of developing harmony, and finally bring them back within a single composition. This is accomplished by fusing a diverse variety of musical techniques that range from jazz theory to 18th century counterpoint. Although their music is thoroughly composed, it contains lengthy sections of improvisation that make every live show unique. Eumatik brings elements of hip hop, funk, trance, jazz, dubstep and disco into ideas that reorder the perception of its own genre-based facade by tastefully covering an incredibly large range of musical concepts. Another important aspect that contributes to their thumb-print sound is their mix of vintage keyboards with ultra-modern sound design and synthesis. / / / As much of their time off-stage is spent organizing and maintaining a focused outlook on each composition, Eumatik is constantly looking for fresh and innovative ways to use music technology as a tool for improvisation. When they’re on-stage, they strive to keep the crowd dancing while making sure everything is melodically and harmonically interesting at the same time. While performing, the overall form and direction is controlled by Josh Lockwood, who utilizes Abelton Live along with an Akai MPK and APC. Jazz pianist, Ashton Kleemann, is constantly playing signature parts on various keyboards along with a MIDI-keyboard that Josh runs Ableton effects through. This MIDI-keyboard directly interacts with what is being played live to create a bizarre and unique atmosphere of band member communication. Mix in the organic sounds of their live drummer, Derek Shelton, and you hear the UFO-summoning, twist-bopping, trance-inducing, disco-fever-catching sounds that are Eumatik.

Comer early and register to win tickets to MojoStock 2012!