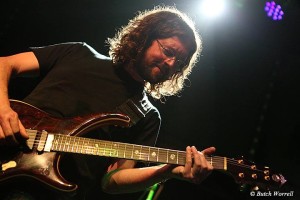 Born on June 28, 1969 in Council Bluffs, Iowa, John Kadlecik grew up in various mid-western towns and at the age of nine, John began to study classical violin. In high school in the Chicago suburbs, John caught the rock-n-roll bug, and, on a quest to understand improvisation, began teaching himself guitar and mandolin. While still in high school, John played in several bands, as well as writing songs and learning the basics of multi-track recording.

John attended college as a music major, studying classical guitar, during which time he discovered the Grateful Dead. He fell in love with their music instantly, dropped out of college, and began playing anywhere an underage musician could find a gig. Chicago would be where he called home for the next fifteen years, playing in various original and cover bands.

In 1997 John co-founded the group, Dark Star Orchestra, a group exclusively devoted to playing the music of the Grateful Dead. Originally started as a side-project, “DSO” rapidly became a nationally touring band. During that time, John also found time for other musical projects including forming a group with Jerry Garcia Band keyboardist Melvin Seals. That group, called The Mix, went on to sign a recording contract and released a full length CD in 2004 titled: American Spring.

Then in 2009, John was asked by Phil Lesh and Bob Weir of the Grateful Dead to join them in a new band called Furthur, which toured for four years, playing many of the celebrated great venues of the United States, including Red Rocks Amphitheatre, Radio City Music Hall, and Madison Square Garden before disbanding in 2014.

Currently residing in Washington, DC, John continues to perform with Phil Lesh and Friends, as well as the DC Mystery Cats and the John Kadlecik Band.