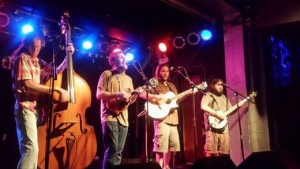 Miles Over Mountains is an acoustic Bluegrass / Roots / Americana band based in McHenry, IL. Their musical styles range from bluegrass, to reggae, to punk, and beyond, all delivered in a “not-so-traditional” bluegrass voice. Their live shows are high energy, centered around their arsenal of original material and refreshing variety of cover songs interpreted in their own way.
In just their first year as a band, Miles Over Mountains continue to turn heads across the Midwest. In 2014 they’ve performed almost a hundred shows at bars, clubs and festivals. Besides playing notable Chicago venues such as Cubby Bear, Martyr’s, Tonic Room and others, the band also held a weekly residency show at the Abbey Pub from May until October carrying on the longstanding local tradition of Bluegrass Tuesdays in the city. The 2014 festival season saw M.O.M. performing at such fests as Shoe Fest, Down On The Farm, Blottopia, Summer Stomp and more, and sharing the bill with The Wood Brothers, Split Lip Rayfield, Ben Miller Band and a host of national and regional acts.

Collectively with decades of stage experience under their belts, M.O.M. strives to provide the audience with a fun and freeing experience at each show with unique sets every time. The band is currently at work on their debut album due out in early 2015