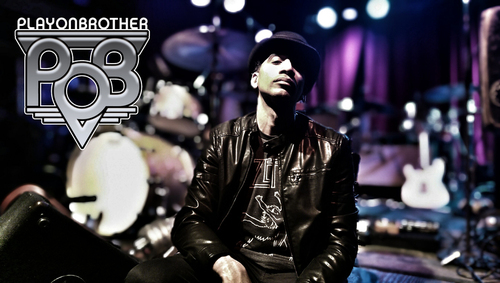 Alan Evans, the founder, drummer and co-songwriter of Soulive, has picked Kris Yunker to replace Beau Sasser on organ and keys in his “electrified soul rock” trio PLAYONBROTHER. Yunker joins Evans and guitarist Danny Mayer for a run that begins July 9 in Cleveland and brings the band to Colorado then back to New England. Mayer and Yunker previously played together in California’s On The Spot Trio (Alan Evans produced and appeared on OTS’s first two albums before Mayer headed East). The band just finished recording their new album, Nothing To Say, and will be launching a Kickstarter campaign to fund the Fall, 2014 release. This will be the debut recording with the name PLAYONBROTHER and it features organist Beau Sasser, who departed to pursue other musical endeavors. “Beau is one Hell of a player and he’s going to do great things”, said Evans. “Kris has some big shoes to fill but we are really looking forward to the chemistry that was there with him and Danny in On The Spot Trio.” Alan Evans’ Playonbrother will continue to hit the road this Summer with many tour dates in the Midwest, Colorado and the Northeast, turning new fans and longtime Soulive fans on to their heavier rock sound, which features Evans’ as the singer from behind the drum kit. “This is a rock and roll band. A lot of cats were thinking we were a Soulive kind of organ trio, but this is song-oriented old school rock,” explains Evans, “come check it out!”