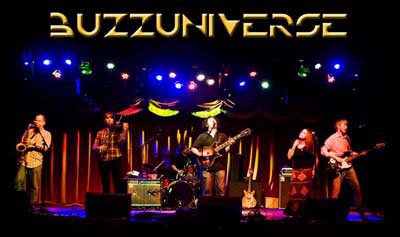 “BuzzUniverse” means the freedom to not be defined by one musical genre, the ambition to have no musical limits, and the opportunity to embrace the world’s musical evolution and bring it to the stage.

An original eclectic blend of rock, jazz, latin & other world grooves, BuzzUniverse features smoking horns and a rock-solid rhythm section. Since 2003, the band has been performing and tearing up clubs and large festivals and has released three captivating albums. Described by Relix Media as “addictive & hip-grinding,” BuzzUniverse has enlightened loyal fans with brilliantly crafted songs, incredible vocal harmonies and ferocious live energy. Native to Elizabeth, New Jersey, BuzzUniverse aims to spread their unique sound and positive vibe far and wide!

Following the release of their 2006 album, birdfishtree, BuzzUniverse received nationwide attention as Sirius/XM JamOn put their song Lovelight Babylon into heavy rotation. They then won Relix Magazine’s national JamOff competition and were nominated for “Best New Groove” at the 2008 Jammy Awards in New York City. BuzzUniverse followed these accomplishments with performances at Gathering of the Vibes, Mountain Jam, FloydFest and many other prominent music festivals, as well as over 15 free concerts in New York City public parks. BuzzUniverse sold out the Rocks Off Concert Cruise around New York City, and was one of the first artists to perform at the Brooklyn Bowl. They also opened up for moe. at the Stone Pony in Asbury Park, New Jersey, and then returned to the Pony to perform on New Year’s Eve.

BuzzUniverse is continuing a rigorous schedule of club and festival appearances in 2010 while working on their third studio album, coming soon!