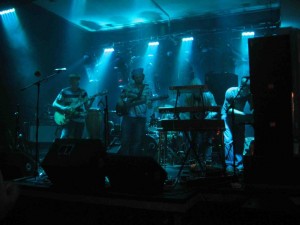 Catch Curtis brings a refreshing taste to the jam scene. Well-versed in jazz theory, they’ve also kept up to par with modern styles and successfully explored possibilities using laptops on stage. The result is a fresh blend of tuneful soundscapes with deep musical roots in jazz and funk.

Hailing from the Midwest, their live sets release an unlikely energy that often leaves listeners contemplating whether they should listen intently or get-down on the dance floor. One thing is guaranteed: when you leave a Catch Curtis show your head will certainly be filled with undeniably catchy melodies and refreshingly positive vibes.

Over the past year, Catch Curtis has played interstellar jamming shows opening for Papadosio, Ultraviolet Hippopotamus, Strange Arrangement, and many other great bands. Constantly developing exceptionally innovative approaches to music, they’ve also matured and grown into one breathing mechanism. Catch Curtis will be spiraling around the nation soon enough and those caught in the pathway will feel an exhilarating shock-wave consequently…

In the summer of 2009, CC was asked to record in the David Letterman Studios at Ball State University for an immersive telecommunications class. A good friend of CC and world-renown jazz trumpeter, Mark Buselli was so kind to come into the studio and lay down a couple solos. CC was most recently named Best New/Emerging Artist of the 2010 Indy In-Tune Podcast Battle of the Bands, and won a fan-base Battle of the Bands at Doc’s Music Hall in Muncie, Indiana.