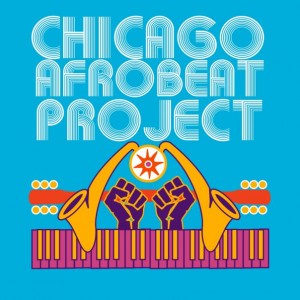 Afrobeat cannot stand still. As the genre’s tempting sounds continue a resurgence across the globe, Chicago Afrobeat Project (CAbP) remains true to its original vision of breathing the intensity of Chicago’s rich music scene into the infectious sounds of afrobeat. Rather than become caricatures of the genre, CAbP slips a reverent nod to the tradition while delivering an energized originality different from any other band on the afrobeat scene today. At each of its 100+ live performances a year, the group’s frenzied songs hit audiences with a big enough one-two punch to tirelessly knock them onto the dance floor time and time again.

Afrobeat’s range of influences — funk, rock, jazz, afro-cuban, high life and juju music – settle into a hypnotic, dance-compelling pulse at the core of CAbP. The group layers a fiery originality around this core through high-energy rock and experimental jazz. The trance-like grooves that hold the floor in the tradition are pushed to new borders in CAbP’s second and self-produced album, (A) Move to Silent Unrest. In it, the group keeps true to the mix of respect to the tradition and forward-thinking experimentation that shine through in their live performances.

The individual players, coming from diverse backgrounds, each hold their own as soloists that ultimately characterize the live shows. Melodic and hard-hitting horn lines create a lyrical flow to the music, delivered by a cutting, driven rhythm section dynamic. Complex call-and-response percussion songs are dispersed throughout the performances. At select shows, African dancers from Chicago’s Muntu Dance Theatre accompany the band. Added up, the music is packaged with original songwriting that explores the stylistic reaches of afrobeat and a few classic covers delivered true to form.

CAbP was nominated as Best African Artist in the Chicago Music Awards (CMA) in 2004 and 2005, and was nominated for the CMA’s “Award of Honor for Contribution to World Beat Music” in 2006. As a natural extension of the group’s ability to connect diverse musical styles through afrobeat, CAbP has featured many notable Chicago guest musicians such as Howard Levy of Bela Fleck fame, Fareed Haque of Garaj Mahal, seven-time Grammy-winner Paul Wertico, Bobby Broom, Jeff Parker of Tortoise, Kalyan Pathak, Diverse, Ugochi, Morikeba Kouyate and many other Chicago greats.