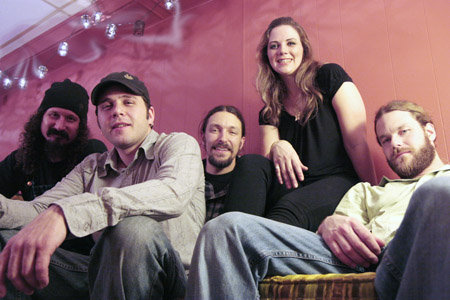 “A definite must for the bluegrass crowd, and big thumbs up for country and jam-band fans”
-The Celebrity Cafe.

Formed over 10 years ago, Cornmeal has grown from humble beginnings into a nationally recognized live music institution. 10 years together is no simple task these days, especially when the last five have seen the band spending over half the year on the road. Heavily influenced by American roots and folk music, Cornmeal blends lightning fast tempos and impeccable harmonies into an unrivaled live performance that continues to expand upon the five-piece acoustic-electric groups’ vast musical repertoire. While steeped in the tradition of the past, Cornmeal continues to forge their own path, pushing the boundaries of bluegrass, Americana and folk for a whole new generation of music lovers. With a rapidly growing fan base and ever-evolving sound, Cornmeal challenges the recipe of the bluegrass sound and live performance.

In the beginning of 2010, Cornmeal released their first live album, Live in Chicago, IL Vol. I, an album that pays tribute to the fans. For the first six years, Cornmeal performed each and every Wednesday in Chicago to small yet loyal crowds. Throughout the winters of 2007-2009, Cornmeal returned to Chicago to pay homage to that tradition. The album is for the fans as a thank you for all the years of dedication, for believing in Cornmeal, and for creating a wonderful community for them to come home to. The album was recorded live throughout the winter of 2009 at Martyrs’ in Chicago, IL. Unlike Cornmeal’s three previous albums, Live in Chicago, IL Vol. I captures the band in its raw, intense format, bouncing through song after song of fast paced, fierce originals and extensive improvised jams that showcase the immense talent and connectivity that have gained them so much fan appeal from coast to coast.

With the release of their debut album “In The Kitchen” (2001 Livin’ Live records), Cornmeal secured its place as one of the top bands in its genre. 2003’s “Tales from Magic Stone Mountain” (Livin’ Live records) garnered much critical attention and became a staple on College and AAA top 10 lists throughout the country.

In May of 2006, Cornmeal released their third album, “Feet First”, which became proof positive that Cornmeal’s tenure on the road brought on an honest and mature sound. Produced by guitarist Kris Nowak and bassist Chris Gangi, “Feet First” features a strong confidence in songwriting, musicianship and the ability of this band to stylistically ride the fence and bring it back home without missing a step.

While playing a blend of high profile venues, jam-band and bluegrass festivals to thousands throughout the region, the band has shared the stage with such highly acclaimed national acts as THE DAVID GRISMAN QUINTET, JOHN HARTFORD, THE DEL McCOURY BAND, LITTLE FEAT, LEFTOVER SALMON, TONY RICE, YONDER MOUNTAIN STRING BAND, DARK STAR ORCHESTRA, moe, SAM BUSH and UMPHREY’S McGEE. They have performed at some of the most high profile festivalin the country including Bonnaroo, High Sierra, Magnolia Fest, 10K Lakes, Wakarusa, Summercamp, DelFest and many others.

They pride themselves on the energy they put forth each night creating an unrivalled live performance that continues to shape itself into a energentic one of a kind experience.

Live in Chicago, IL Vol. I proves that Cornmeal continues to be a band to watch out for. Every show they play is a unique experience that leaves fans begging for more.