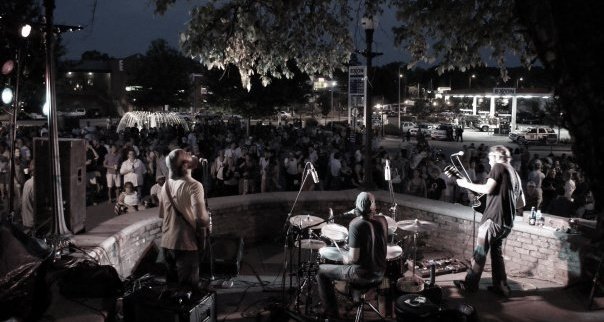 On Dangermuffin’s 2010 release Moonscapes, the Folly Beach, S.C.-based trio sang about home. Even they couldn’t have expected the extent of that paradox — the album grew the band into a traveling national act, with songs on both SiriusXM’s Jam_On and Outlaw Country stations and slots at major festivals across the country. With their brand new follow up, Olly Oxen Free, Dangermuffin have returned home. No longer easily dubbed an Americana or roots-rock band, the group’s sound encompasses ska, calypso, and even Southern rock, often within the same song. Like the cry bellowed during a children’s game of hide-and-seek, Olly Oxen Free signals that it’s safe to come out from our hiding spots, gather back together, and celebrate late into the evening. Dangermuffin is more ready than ever to provide the soundtrack.

“Don’t let the name fool you- Dangermuffin is not another run-of-the-mill, directionless jamband. Rather, it’s a trio with immense talent and potential that has gifted songwriting and playing abilities in spades. Just like many a funny named band before them- Phish, The String Cheese Incident and Umphrey’s McGee come to mind- Dangermuffin is likely to become synonymous with those fans who love bands that deliver something new and promising each show.” – Josh Baron, Relix Magazine, Editor-in-Chief