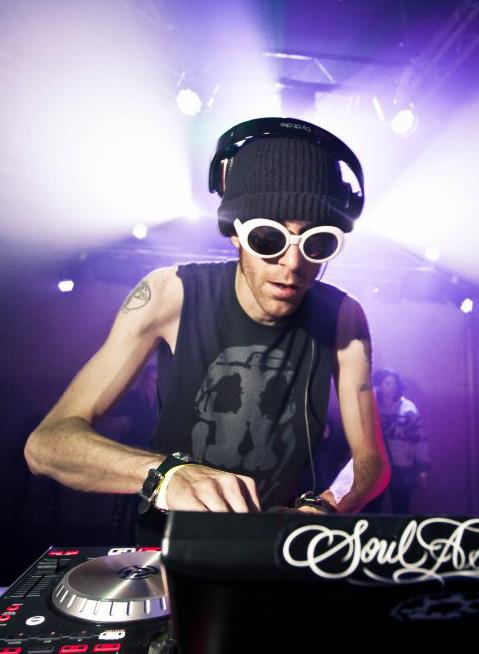 “I am a musical storyteller.”

———————————————————————————————————————
SOLO is a DJ in the true sense of the word, following in the footsteps of eclectic, multi-genre tastemakers, performers, and producers like Z-Trip, Cut Chemist, and DJ Shadow. He is also a musician who plays many instruments, produces music, an ongoing, unparalleled collection of moment-defining mixtapes, and has a unique, natural energy as an entertainer and performance artist.

Starting as a turntablist and battle-style DJ, he moved into hip-hop production and worked for several years in Los Angeles as an assistant to DJ Muggs of Cypress Hill. There he got a real-world music business education, traveling the world with Muggs, working and performing with other well-known hip-hop acts including The Wu Tang Clan (GZA, RZA, Raekwon, Killah Priest), Everlast, Planet Asia, Psycho Realm, and a host of LA’s finest. During this time he also did a live weekly hip-hop show on U-Stream called “40s & Blunts”, where he featured the latest in underground hip-hop, as well as interviews and performances by old-school legends and new school up-and-comers.

Relocating back to his home town of Chicago, IL, SOLO became drawn to the emerging sound of Dubstep and the electronic music world. He joined forces with some of Chicago’s locals including Phaded, Kabz, Ruckus, Nameloc & Whoa-B, and started doing events all over the city. Eventually migrating further south to the town of Urbana, IL, he joined up with the Chalice Dubs crew to throw monthly BASS music parties and started touring the Midwest college circuit, where late-night raves and jam-band festivals were merging together into a brand new “Burning Man” style subculture. With his unique genre-bending style of DJing, along with original mashups and production, he toured all over the Midwest supporting EDM acts such as Rusko, Skrillex, Figure, Vaski, Borgore, and Die Antwoord, as well as playing major music festivals like Electric Forest, Summer Camp, North Coast, Spring Awakening, and Wakarusa. As a result of his festival touring, he also did tours opening for electronic based jam-bands, Boombox and Big Gigantic, as well as produced heavy electronic remixes for Chicago locals Umphrey’s McGee and Cornmeal.

DJ SOLO will continue to bring you the highest quality frequency transmissions from all genres of AWESOME music in every corner of the Universe, past, present, and future.