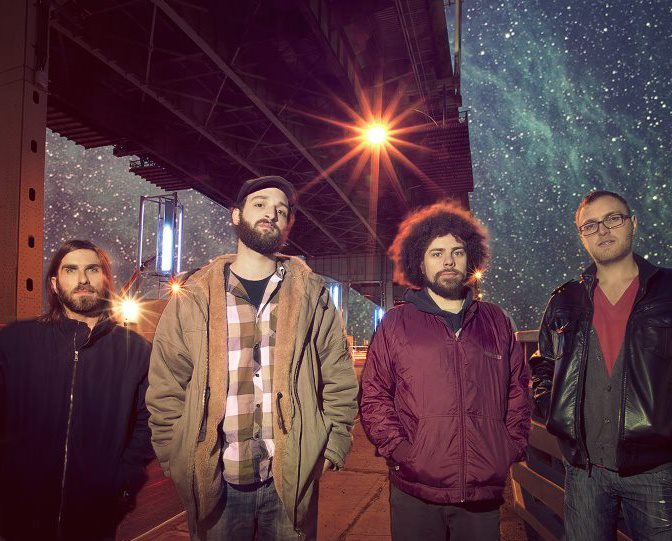 Dopapod exists at the crossroads of full throttle intensity, deep pocket groove, intricate technicality, and limitless experimentation. With no regard towards towards stylistic boundaries, the sound that emerges from the quartet both live and in the studio is as varied and diverse as the many influences that they adapt from. Their approach and commitment to complementing a distinct genre bendin
g sound to top-notch musicianship has set them apart from many of their contemporaries and keeps music lovers eagerly returning to shows.

In the past two years, Dopapod has firmly planted seeds in music fan’s ears all up and down the East Coast and into the Midwest with their incessant touring schedule. Covering all this ground has seen the young, yet seasoned group make appearances at numerous festivals including Camp Bisco, Mountain Jam, Bonnaroo, Burning Man, Bear Creek, The Big Up, Rootwire, Strangecreek, and more. Their electric live showcase has been cultivating a fast growing, loyal fan base, and seen them share bills with artists such as Lotus, EOTO, John Medeski & Billy Martin, Papadosio, Zach Deputy, Brothers Past, Yo Mama’s Big Fat Booty Band, Spam Allstars, Sam Kininger (Lettuce, Soulive), and Carl Palmer (Emerson, Lake, & Palmer).

Dopapod’s latest release, I Saw Live Dopapod, Evil Was I, is a candid representation of choice cuts from the first half of 2011. Recorded and mixed from multi track recordings, the album showcases the band at their very finest. From explosive disco jazz funk tracks like ‘Indian Grits’ and ‘Off the Cuff’ to wompy progstep rockers such as ‘French Bowling’ and ‘Freight Train’, the quartet’s compositional and improvisational splendor has been captured and put on display to offer a peak into the brainwork of their entrancing live experience. The crown jewel of the collection might be “Dazed and Confused” – an arrangement that shows the group’s simultaneous mastery at both synth-bass womp drops and guitar scorched classic rock wailing. Each track was carefully select, mixed, and mastered to showcase the full Dopapod gamut: new and old, premeditated and spontaneous, light and dark.

While the distant future reads plots for world domination, the near future will see Dopapod continuing to develop their craft both on the road and in the studio. With a heavy touring regimen in place to continue scouring the country, Drawn Onward, the second studio release, will be dropping at the blink of an eye, offering fresh takes on live favorites. Keep your eyes and ears peeled for the sonic whirlwind that will be coming to venues and stereos near you!