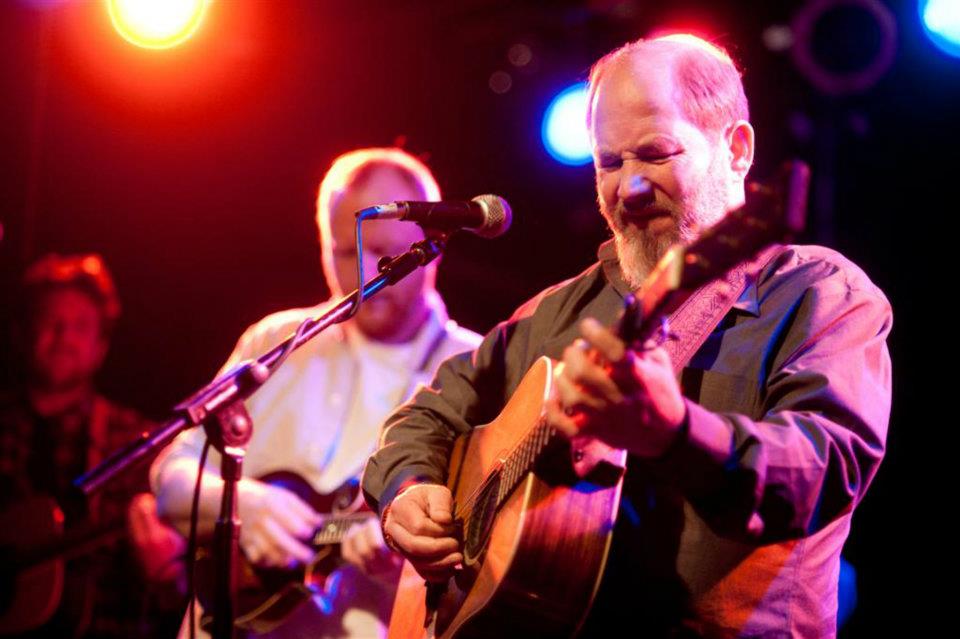 Eric Lambert has been pickin’ and grinnin’ his way into people’s hearts for over 40 years. Specializing in the fiery art of flatpicking, he has built a distinguished career writing, performing, recording, and teaching Americana music in and around Chicago, IL and beyond. Traces of rock, folk, bluegrass, country, and blues can be detected throughout his music, delivered with energy, soul, and inspiration. His voice, presence, and precision moves audiences to their feet, while his playful spirit and warm sense of joy makes people feel right at home.

Eric’s music resonates the old school philosophy of the groundbreaking musicians who inspired him; music should know no boundaries. Influenced by Duane Allman and Dickey Betts at an early age, Eric discovered country and bluegrass music through the Nitty Gritty Dirt Band album, “Will the Circle Be Unbroken.” Raised on Chicago’s south side, he cites diverse influences as catalysts in shaping his unique roots music sound. His original voice was crafted by blending the bluegrass approaches of Tony Rice, Clarence White, and Norman Blake with those of his main influences such as B.B. King, Bob Dylan, Jerry Garcia, and Old & In The Way.

Eric excels at every style of music he performs, moving through them with an uncanny ease and smoothness. The richness of diversity in his influences is evident in his playing and throughout his vast career, which spans 10 countries as a solo artist and as a band member. Some career highlights include playing with Virgil Kane along with Alabama and George Strait, and being a front man in bands such as Big Shoulders, Heartsfield, Valerie Smith Band, and most recently Chicago’s award-winning Henhouse Prowlers, being featured on their latest album release, “Verses Chapters and Rhymes.” He has also appeared in Flatpicking Guitar Magazine.

His original music collection contains three solo albums, produced and released on his own label, Woodpicker Music. The albums showcase the transformation his music has taken over the decades, ranging from rock to acoustic roots. His first release “Year of the Gnome,” was followed up strongly by his next album, “Just The Way I Feel.” Receiving rave reviews, his second release has been described as “a joyful celebration consisting of 12 Lambert-written songs featuring heartfelt vocals, passionate guitar playing, and the stylistic versatility that you’ve come to expect from this talented artist.” A busy touring and teaching schedule meant fans would have to wait seven years before the next album, “Doin’ Alright.” Embracing the evolution from electric to acoustic guitar, the latest album was geared toward acoustic guitar lovers. The California Bluegrass Association stated about the album, “sometimes music flows from the CD to the heart and the effect is timeless.”

Music education continues to be a mainstay in Eric’s life, fulfilling a dream and supporting his mission of helping others learn how to play the guitar, and utilize a variety of guitar styles and techniques. For the past 35 years, he has been professionally teaching music, including the art of flatpicking, which is a style he has become known for. “It is the excitement of the style that originally drew me in years ago,” he shared.

Eric believes teaching music is about more than just giving lessons; it should be a full musical education experience. Even further, he knows music can transform lives. His embrace of this ideal led him to teach music therapy to industrial workers for 15 years. As an educator with Job Link, an organization specializing in continuing education programs for Union Steelworkers, Eric taught music therapy to union employees, utilizing music and the guitar to help increase self-esteem, relieve stress, improve teamwork through a social activity, and give them a creative hobby that would continue to benefit them. Research suggests that “through musical involvement in the therapeutic context, peoples’ abilities are strengthened and transferred to other areas of their lives.”

This year, Eric was awarded a position as an official TrueFire artist and educator, teaching guitar along side the world’s best musicians such as Frank Vignola, Robben Ford, and Larry Carlton. Eric’s virtual classroom will be called “Flatpicking Acoustic Guitar: Bluegrass and Beyond.” He is currently in the process of building his classroom on TrueFire.com, and anticipates it will be ready for students by the end of the year.

Moving forward, Eric is thrilled to be focusing more on his original music and education efforts. He launched a new project this year called Eric Lambert & Friends. The group is bringing Eric’s original music to life in a new way and taking audiences by dance. This unique acoustic/electric fusion arrangement features Eric on lead vocals, acoustic guitar, and mandolin, being backed up by Dan Rogers on bass, and a cast of talented musicians and friends playing guitar, fiddle, dobro, mandolin, percussion, and even the washboard from time to time. The band often features special guests.

Eric Lambert & Friends music transcends the expectations of their fans, offering a diverse palate of musical tastes. Their music is not bound to one genre, but rather is offered through a spectrum of sounds that pay homage to the some of American music history’s greats. Improvisation and artist interpretations are common and keep the music and experience fresh from show to show, making each one unique; never to be exactly repeated. The ensemble has been performing around the country, quickly gaining support and a reputation for fun.

Eric can also be found participating in many other events, projects, causes, and ensembles. There is no limit to his musical abilities and no waning on his willingness to be involved. His ‘no bounds’ mantra comes into play every time he steps on stage or into a recording studio. You can always look forward to a powerful, original performance delivered with a smile. Music lovers of all ages and backgrounds enjoy Eric’s enthusiastic approach, fueled by his genuine love and deep respect for all walks of Americana music.

The fall of 2012 and beyond will be full of new and exciting ventures. Some things to look forward to include a new album being recorded, his TrueFire classroom being opened to students, Eric Lambert & Friends performances, and much more! We invite you to join us on this exciting journey in person and online, and fill every day with a smile and a song.