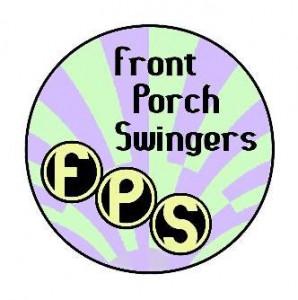 The Front Porch Swingers were formed in May of 2010. FPS plays many styes of music (Americana /Jamband /Rock) summed up in a psychedelic style similar to the The Allman Brothers, The Band, Grateful Dead, Little Feat, Phish, Wide Spread Panic and others. The rhythmic core of FPS are the 2 drummers, Keith Yount and Joe O’Connell. Joe and Keith were the backbone of a long time Indianapolis favorite, The Spirtles, since 1985. Few rock bands have ever featured two drummers, but these two percussionists with their bonding rhythms, inseparable beats and raw driving energy are a trademark of The Front Porch Swinger’s sound. Tom Kiefaber saw his first rock concert, backstage at an Allman Brothers show. Never looking back, Tom has become an imaginative master guitar player. He has jammed with some of the best, including Dickey Betts, Warren Haynes & many others. On lead vocals and rhythm guitar is Josh Oldham (Acoustic Flyer). Josh has been an integral part of the Indpls music scene for some time now. Finally holding down the bottom end of the Front Porch Swinger’s rhythm section is Shawn Bryant on Bass guitar. Shawn has played with a number of Central Indiana bands including the Max Allen Band, Funk Bud Johnny and Milkweed Flyer. He has opened for Leftover Salmon, and the Dirty Dozen Band. All together this is a Groove Monster!