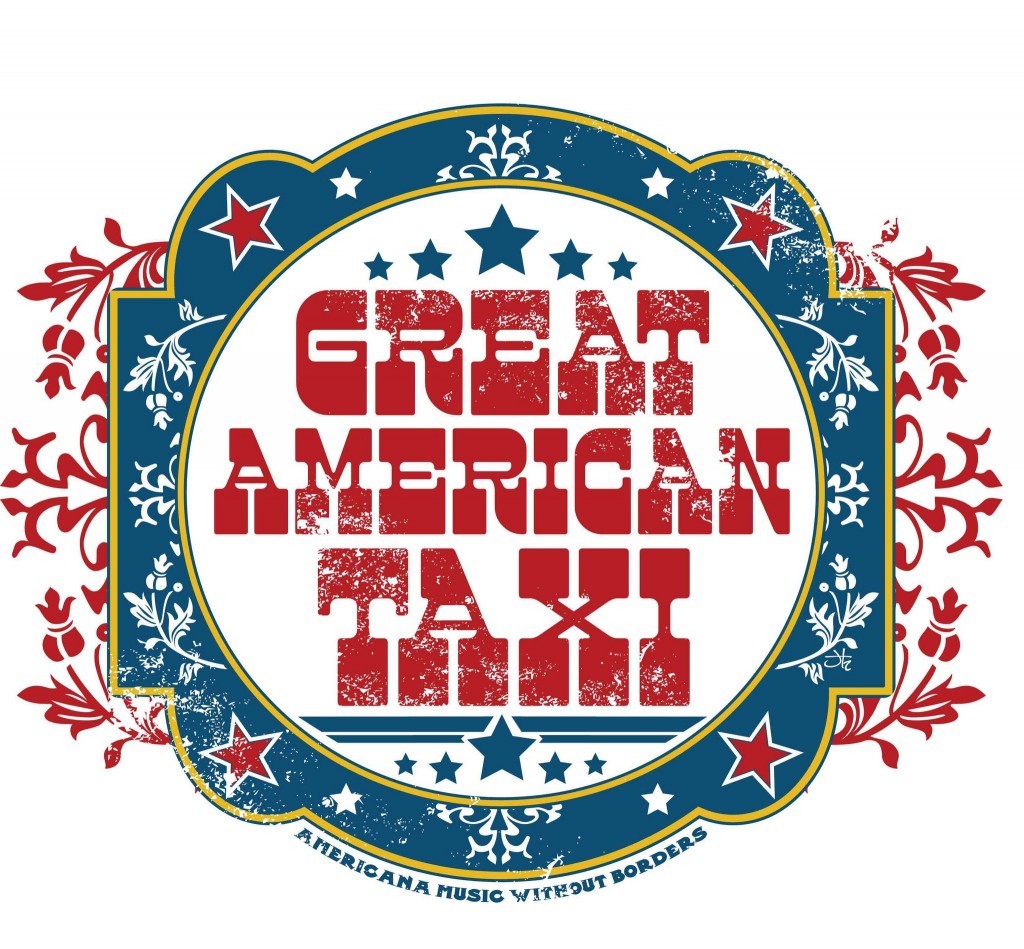 In the past five years, Great American Taxi has become one of the best-known headliners on the jam band circuit. Their uninhibited sound is a swinging concoction of swampy blues, progressive bluegrass, funky New Orleans strut, Southern boogie, honky tonk country, gospel, and good ol’ fashioned rock ’n’ roll. Great American Taxi was born when singer, guitarist, and mandolin player Vince Herman of Leftover Salmon joined keyboard player and singer Chad Staehly for a superstar jam to benefit the Rainforest Action Group in Boulder, in March of 2005. “We put together a dream band of the best local musicians for a one-off gig,” Herman recalls. “It worked so well we had to do it again, and again, and again.” Great American Taxi quickly evolved into one of the best country-, rock-, and bluegrass- influenced jam bands in the land, masterfully blending acoustic and electric instruments into music they call “Americana Without Borders.”

Great American Taxi has been equated with roots rockers like the New Riders of the Purple Sage, Grateful Dead, Wilco, Uncle Tupelo, The Byrds, and Little Feat. Herman finds the comparisons flattering. “We’re definitely connected to all the acts in the country/rock spectrum, as well as the spirit of Gram Parsons and Woody Guthrie,” he says. “We want to address the issues appropriate to our times, while making music that gets people up and moving.”

They’ve made their reputation as an exciting live band, willing to invite the audience on stage for impromptu jams and sing-alongs. “When strangers join in to sing and play, you don’t know what’s going to happen,” Herman grins. “It keeps you on your toes musically and brings out feelings of camaraderie and community.” That loose, anything-can-happen feel is the hallmark of Reckless Habits, Great American Taxi’s second album. The band — Herman, Staehly, Jim Lewin on electric guitar and vocals, Edwin Hurwitz on bass, and drummer Chris Sheldon — spent a couple of weeks at Backbone Studio in Loveland, Co, with producer Tim Carbone (from Railroad Earth) working together to bring the feel of an on-stage performance to the recording process. “We did the tracks live, playing together,” Herman says. “We like to make real music, as opposed to executing parts.”

“The band is a true democracy,” Chad Staehly adds. “We tinkered with the tunes on the road, with everybody having input. In the studio, Tim would suggest ideas to make them sound bigger and brighter.” Carbone brought in the Black Swan Singers — Sheryl Renee, CoCo Brown, and Shelly Lindsey — to add gospel flavored backing vocals and the Peak to Freak Horns — Justin Jones, sax; Nathan Peoples, sax; Dan Sears, trumpet; Dave Stamps, trombone — for some New Orleans-style brass accents as well as pedal steel player Barry Sless (David Nelson Band, Moonalice) and banjo player Matt Flinner.

The 13 tracks on Reckless Habits gleefully stretch the boundaries of American roots music with a nod to both tradition and the future. The title track, Staehly’s salute to Gram Parsons, is a good example, a song that’s as country as it is rock. It’s a rousing honky tonk tune, with Carbone’s fiddle and Sless’s pedal steel kicking up the sawdust on a Saturday night dance floor. The titles of several Parsons songs appear in the lyrics, and there’s a definite Cosmic Cowboy vibe to the band’s expansive playing. Staehly’s “American Beauty” tips its hat to the Grateful Dead and features an extended jam by the ensemble with Sless shining on pedal steel; Herman’s acoustic and the subtle twang of Jim Lewin on electric add intertwining guitar parts. Herman’s “Cold Lonely Town” is a slow R&B tune that describes life during the long Colorado winters. The Black Swan Singers add smoky doo-wop asides and CoCo Brown’s thrilling gospel-inflected melismas to Herman’s poignant vocal. Producer Tim Carbone described its swampy, laid-back vibe as “‘A Day in the Life’ meets Gram Parsons in the high desert.”

The Taxi show off their devil-may-care side on several tunes. “One of These Days” is a bluesy country-rock salute to New Orleans driven by Chris Sheldon’s second line backbeat, the Mardi Gras bounce of the Peak to Freak Horns and strong solos from Lewin’s slide guitar and Staehly’s piano. “Good Night to Boogie” is a countrified boogie-woogie number that lives up to its name with a forceful rock backbone and sizzling Hammond B3 work from Staehly, while “Fuzzy Little Hippie Girl” is a sly, lusty rocker with swooning pedal steel and a bouncy country-rock rhythm. “Smiling Hippie Joe Smith wrote that song for us,” Herman says. “We wanted to pay homage to the hippie country girls on the festival circuit that make the world go round.”

Other standouts include the overtly political “New Millennium Blues,” with Staehly’s electric piano and the sprightly tempo adding some sunshine to the song’s tale of hard luck and hard times; the obligatory bluegrass jams “Unpromised Land” and Bill Monroe’s “Big Sandy River,” showcasing Carbone’s fiddling, Matt Flinner’s banjo, and excellent ensemble work; and a New Orleans-meets-ragtime take on John Hartford’s (“Just When You Think It Can’t) Get No Better (Then It Does)” featuring the Peak to Freak Horns. “We go into the studio to make music, not records,” Herman explains. “We all love to improvise, but this band’s not about solos. It’s about playing together and letting the music take over.”

Reckless Habits captures the rowdy exuberance of Great American Taxi’s live shows with a timeless rock feel that music lovers of all ages can relate to. They fuse strong, focused songwriting with the freewheeling jam band vibe that’s made them a major draw on the festival circuit. The album will be marketed in a die cut package designed by artist Greg Carr, who designed Steve Martin’s The Crow. “Greg has a picture of nuns smoking on the cover, wearing their Reckless Habits,” Herman explains. “We want to give people something unique, so they won’t just burn it and pass it on.”

The band’s cryptic name refers to Herman’s unique skiing style. “A friend of mine once said I came downhill looking like a great American taxi — a large lumbering object that’s totally out of control and coming downhill towards you moving faster and faster. It seemed to fit the band’s MO, so we adopted it.”

Vince Herman grew up in Pittsburgh, the youngest of seven children in a music loving family. He played piano, guitar, and mandolin growing up, soaking up Motown, rock, bluegrass, and the polka music played by neighborhood wedding bands. As a high school freshman, he attended the Smoky City Folk Festival and was seduced by the social scene and the off-stage free-form jams. He studied acting at the University of West Virginia and moved to Colorado to finish his degree, but dropped out after meeting Drew Emmitt. He joined him in the Left Hand String Band, one of the first groups in the progressive bluegrass movement of the ’80s. His next aggregation was a Cajun jug band called the Salmonheads. When the two merged, they jokingly combined names, and as Leftover Salmon, a country/ bluegrass/Cajun outfit, became one of the best-known jam bands in the country.

When banjo player Mark Vann died of cancer in 2002, Leftover Salmon lost momentum. Herman had a few rough years and survived a broken neck before joining keyboard player Chad Staehly to create Great American Taxi with guitarist Jeff Hamer, bassist Brian Schey and drummer Jake Coffin. After a few departures Taxi has settled into their latest incarnation with Lewin on guitar, Sheldon on drums, bassist Brian Adams and occasionally Barry Sless on pedal steel. They’re marking their Fifth Anniversary as a unit with the release of Reckless Habits. Herman, Staehly, and their Great American Taxi cohorts will be doing what they do best to support the record, touring heavily and getting ready for the beginning of the Spring Festival season. “We’ve been doing gigs with (singer/songwriter) Todd Snider,” Herman says. “He’s a great cat to play with and he hasn’t done a lot of improv, so it’s a joy to play with him. It opens up a new world for him and gives us some new songs to play. We believe in the blue-collar work ethic, improving our music by playing live shows and bringing people into the present moment with our lyrics and instruments. That’s what we love to do and we’ll keep on doing it as long as we can.”