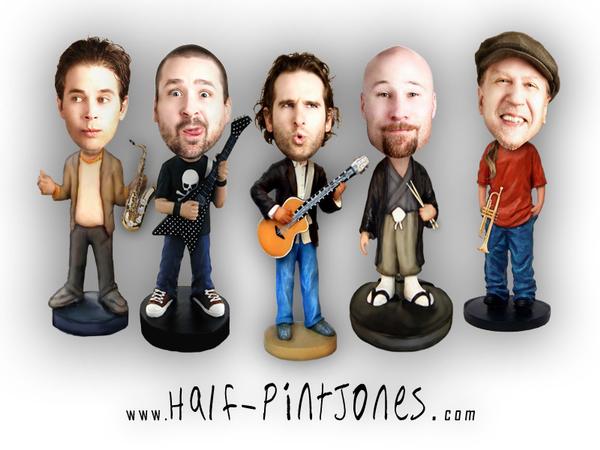 Half Pint Jones is a colorful five-piece project of sophisticated funk, jazz, and rock sprinkled with the musical flavors of New Orleans. This dynamic group was birthed during the aftermath of Hurricane Katrina and is rooted to staying true to all musical and spiritual influences; keeping their music honest and fresh. Based in South Bend, Indiana, these five musicians have come together to express a new, organic, manner of story-telling and musical improvisation, while maintaining a completely relatable sound.

Creating music for Half-Pint Jones is often birthed out of some level of emotion. From tragedies the band has faced, to finding love, to having children, the experiences these five guys have gone through have taught them to chase what they hold dear and to be as honest as possible as musicians.

Their goal is to be the best live band they can be, while also working to achieve incredible studio sound, reaching the masses with their music. This band is road hardened just enough to show the maturity level of the band—their work ethic constantly proves they are putting out the best product they can.

The band is ready to release their second album in two years, Single File. This record, for the band, was an absolute exercise in three to four minute composition. Compressing the songs, cutting the fat…taking the Half-Pint Jones style of music, stripping down the composition to the bare necessities, and building back up from that point. Their first album, Trilogy of Patches and Olaf was built of very flushed out, linear songs, that took more time and space to narrate. Trilogy was extremely well received by radio stations, but the common response from producers and DJs was that though they loved the music, the songs were far too long for any permanent positions on radio. Creating Single File left the band with the perfect reason to cultivate the stories and songs in a manner that would allow them to try and find a more permanent home on the radio format.

Their song writing process is amazingly organic. Generally speaking, the guys get together with an idea, brought in by one member of the other, and they all go to work growing that idea by inserting different moods, different opinions. The rhythm section builds upon each other’s beats and phrasing, and they mesh together with different processes and effects, and establish a steady foundation. Adding in the horns to weave within the groove or rub up against it, Half-Pint Jones creates the perfect mix of emotions originally imagined in the beginning. In “Mixture of Things”, the band came together using a set of lyrics that Justin wrote about a celebratory night out. “Ryn” digs deeper in to the relationship of one of the band members, while showing how strong the band’s ballad composition is. A song like “My Name” shows not only the incredible soul, R&B flavor of the band, but the lyrical sensibility as well. “Jam Sandwich for Jonas” is a tribute to the saxophone players’ son.