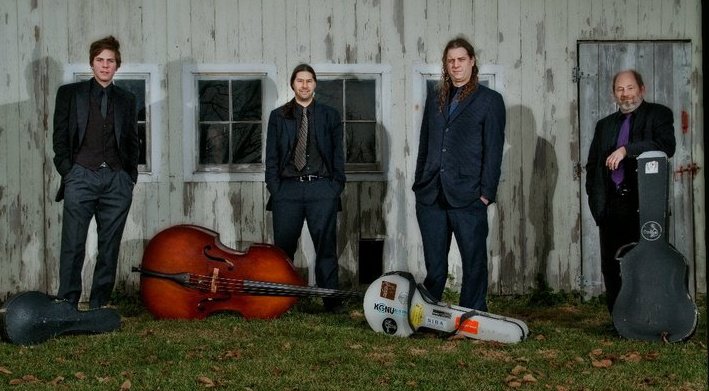 After seven years of hard work and a relentless tour schedule, Chicago’s The Henhouse Prowlers have gained a growing reputation for their highly original, tradition-inspired bluegrass built around intricate harmonies and electrifying stage energy. In 2010, while balancing time on the road and in the studio in Colorado, the Prowlers placed third in the prestigious Telluride Bluegrass Festival Band Competition and took top honors in the RockyGrass Band Competition.

During this time, the band entered the studio with visionary producer and dobro player extraordinaire, Sally Van Meter, completing its third album. The product, thirteen-track “Verses, Chapters and Rhymes,” features original tales of life’s trials and tribulations laid over vocal and instrumental work as refined as it is danceable. With the guidance and vision of Sally’s truly professional production work, “Verses” offers a mature statement from Chicago’s hardest working bluegrass band that is as clean, crisp and deliberate as it is hard-driving and loaded with the raw passion and energy the boys have made their trademark.

The year 2011 has been filled with exciting opportunities for the band. After releasing “Verses” and performing at Wintergrass in February, the Prowlers embarked on their first ever European tour. The international debut was a stunning success and the band has scheduled an extended return to Europe in April 2012. Meanwhile, the Prowlers are on tour coast-to-coast with featured performances at Summercamp, RockyGrass and the Bristol Rhythm & Roots Festival.

Dedicated equally to tradition and innovation, The Henhouse Prowlers center their sound on that of the formative years of bluegrass, while keeping their pulse on today by covering contemporary topics in a largely original repertoire. The group’s prolific songwriting provides entree to twenty-first century topics not typically tackled by traditional bluegrass groups. At the same time, the Prowlers wear the Bill Monroe mantle with spit and polish, performing in suit-and-tie in a tightly choreographed, one-mic stage setting. Combining passion, confidence and flair with instrumental and vocal prowess, the Prowlers deliver dynamic bluegrass with an edge.

Original members Ben Wright, five-string banjo, and Jon Goldfine on upright bass, are joined by Eric Lambert on guitar and Grant Ziolkowski on mandolin. All four bring to the table diverse musical palettes, having pursued music in a variety of settings, ensembles, and genres prior to jelling as The Henhouse Prowlers.

Their eclectic musical backgrounds were the perfect fit when called upon by NBC Today Show correspondent Mike Leonard to compose the soundtrack for his PBS documentary series. Based on the best-selling book, “The Ride Of Our Lives” follows Leonard’s family on a cross-country motor home trip with the backdrop of tradition-inspired music composed and performed (off-camera) by The Henhouse Prowlers.

The Chicago-based Henhouse Prowlers are adeptly positioning themselves for nothing less than success. Each member does double duty within the group, holding a business as well as musical post, making it a total collaborative effort. Currently on the road at least two-thirds of the year, the band straddles a unique spot in the current nationwide bluegrass explosion. The Prowlers look, sing and play the part with passion and prowess, attracting audiences both young and old, from the traditional festival circuit to dance-friendly night clubs and beyond.