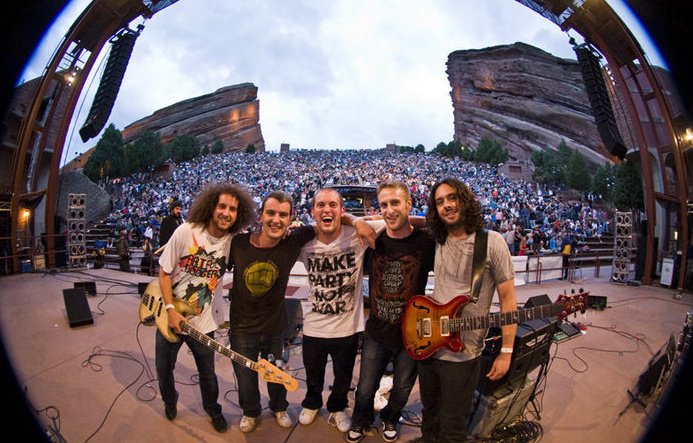 Dynamic. How better to describe Kinetix, a band whose most recent album Let Me In hit #47 on the iTunes Top 200 Rock Charts and yet just wrapped separate national tours with hip hop darlings Flobots and Australian roots-rock kings Beautiful Girls? ‘Let Me In’ certainly plays like a byproduct of a unique career trajectory, managing to maintain a fresh approach while smoothly transitioning between energetic rock and carefully crafted pop.
Hot on the heels of their new album, a free acoustic show release and an upcoming slew of major summer festival dates, Kinetix looks to be even more potent in the coming months. Already renowned for their performances, it’s easy to call Kinetix in 2011 a “must-see” live act.

Simply put, they’re the type of band that reminds you why it’s fun to let loose.
Kinetix’s rise from their humble Denver roots into a nationally touring band is the result of talent, enthusiasm and a lot of hard work. Formed at the Lamont School of Music at Denver University, Kinetix was originally meant as a vehicle to blow off steam and play music at weekend hangouts. However, their popularity during those early days became a campus phenomenon that quickly outgrew the limited confines of house parties and campus events. Within two years of forming, Kinetix was selling out local theatres and collecting invites to summer festivals nationwide. Encouraged by the warm response, the band set out to establish themselves nationally and have been building their fanbase ever since.

The eleven tracks of Let Me In were engineered and mixed by Jason Livermore at the reputably rock and roll Blasting Room Studios and mastered by Chris Gehringer of Sterling Sound. The new album builds upon the band’s reputation as a live tour de force, but now heralds the rock quintet as studio musicians capable of creating an album worthy of mainstream radio play.