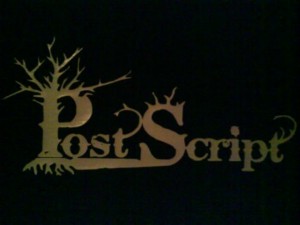 The Post Script is a funk laced, jam-band influenced, pop rock trio. The boys in the band came together out of the ashes of their previous bands with which they played, forming the band that they believed to be “The Post Script” to their musical careers. After a summer of jamming together in a friend’s basement, they decided that they had truly found something special. After a few years of finding their voice as a band, and working together to write songs with instrumental and lyrical meaning, they came in contact with Eric Johnson, an engineer and producer whom took their voice and refined it into an album format. While working with Eric at his studio, The Pop Machine, in Indianapolis the band recorded their first full length album, “Seasons Change.”

Since completion of the record, The Post Script has extensively toured the midwest, south-east, and north-east coast. The band has also shared the stage with the likes of The Plain White T’s, and won numerous competitions for songwriting and live performance in their hometown of Indianapolis.

Between almost constant touring and practice, the band has managed to refine and perfect their completely original sound by combining all of their many musical influences. From heavy metal to electronic to idie and classic jam band blues, The Post Script includes elements from all of the music that they love, creating a melting pot of sounds.

The Post Script is a band that brings unparalleled love and enthusiasm about their music to the stage every night, and leaves fans walking away from shows saying, “Wow, those guys love the music they play!” The Post Script wants to share that love with you.