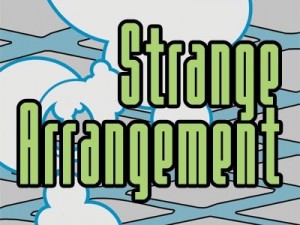 Trying to put a label on something is difficult. You run the risk of catering to the wrong demographic, or scaring away the right person. Labels are for soup cans and cereal boxes in my opinion and should be kept as such. Unfortunately, when trying to market a band to the masses, labels are a necessary evil. That being said, we have been wrestling with a moniker or label if you must, to describe the musical stylings of Strange Arrangement for an exhausting amount of time. This has proven to be quite a project for us as a Strange Arrangement show stradles the many fences of musical genres, not falling on any particular side or into any specific category. If we wanted to get this over and done with, we would just call Strange Arrangement a jamband and be done with it. But it’s not that easy. Elements of funk, jazz, swing, pyschadelic and progressive rock, rockabilly, calypso, latin, and reggae styles are all present at a Strange Arrangement show. Throw in a few well placed covers, a few jokes, some audience participation, and you have yourself a description that satisfies most of what you are hearing. But that isn’t a cute little label is it? No, people want their musical descriptions spoon fed to them like an infant. Well if that is the case, you can call Strange Arrangement a funky jazzy progressive pyschadelic reggae swingabilly rock band. Doesn’t exactly roll of your tongue nor lend itself to marketing does it? No, in fact it actually sounds like crystal meth fueled auctioneer rifling through CD’s at a Best Buy. Other than changing musical styles, there is so much more going on within the music that makes it more impressive. Strange Arrangement actually writes songs first and jams second. Their original songs have the ability to leave their audience captivated by their ever changing time signatures, haunting and catchy melodies, and funny and heartfelt lyrics. The Chicago based quartet consisting of, Joe Hettinga (keys, vocals), Jim Conry (guitar, vocals), Kevin Barry (bass, vocals), and Bob Parlier (drums, vocals) released their first full length LP “Side by Side” in the Winter of 2008 and has been rigorously supporting its release by touring throughout the MidWest. So in an effort to appeal to the status quo we label ourselves as a songwriting jamband. A typical Strange Arrangement audience will leave its show impressed by the songwriting/musicianship and tired from shaking their butt.

“Strange Arrangement’s musicianship and songwriting puts them in the “best of” category of up and coming bands. Equally deft at intricate arrangements and memorable melodies, this young band has loads of promise (with a devout fan base to back it up), and the live shows are always an exhilarating experience.”
– Joel Cummins of Umphrey’s McGee ..