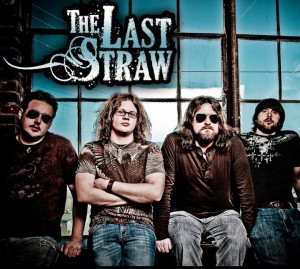 Four men, from different musical backgrounds, combine the influences of their past and their vision of the future to create a sound so unique, yet so recognizable, that it can be mistaken as nothing but The Last Straw. Screaming riffs, impeccable percussion, roaring slide guitar, groovy bass, and the sensation of the perfect organ notes fill the sound that becomes so easily familiar. Songs like “Rock N’ Roll Queen,” and “She Don’t Love You” are reminiscent of some of The Last Straw’s greatest influences; such as The Black Crowes, The Allman Brothers, and The Beatles. Kyle Daniel’s lyrics scream blues, soul, and rock with the power of a voice far beyond his years. Quincey Meeks’ notes stream from his amplifier in perfect accompaniment, while Marc Williams keeps the bass line fresh for every song. Pearce Harrison marks the beat with his well timed thunder .The combination of all four men’s eclectic southern roots and influences produces a stripped down, in your face sound that’s familiar, yet fresh. Their huge guitar solos and keys sweep over the top of the hip-swinging bass lines and precisely timed drums and combine with many of the same elements that made bands like The Jimi Hendrix Experience, Led Zeppelin, and The Who legendary.

Not often is it that you find something that is so fresh, unique, and new wrapped up in a sound that pleases your senses like The Last Straw. On stage they go huge on songs like “Down the Line” and “Take a Ride,” and blend covers from the Grateful Dead to Rage Against the Machine into their originals. They’ve performed in both festival and concert format, and their long list of accomplishments include The Forcastle Festival of 2009 as well as opening for Blues Traveler later that year. They’re a powerhouse in Middle Tennessee, and recognized throughout the southeast as one of the best progressive southern rock bands touring today. They’ve received great accolades and multiple awards. Their work ethic and dedication to the music is taking them places…..and fast!

“…their short set simply killed. A last-minute addition to the (Forecastle) festival lineup, this fearsome five-piece from Murfreesboro, Tennessee played with the ferocity of a caged animal… Expect them to be added to many festival lineups in the future.” Frank Etheridge, Jambase.com, July 17, 2009

“The Last Straw opened the show with their always effervescent energy, hard-hitting rock ’n’ roll and catchy tunes that are conducive to the large crowd they draw to every show.” Jodie Campbell, Pulse Magazine, December 11, 2008

“Each Last Straw member more than held his own as a soloist, but the band’s strength came through in its tightly arranged numbers… while the band’s parts are magnificent, the sum is even greater.” Jason Perterson, Southeast Performer Magazine, January 4, 2008

“Their sound has an appeal that spans across three generations, reviving the way music was meant to be played.”
Christy Cheshire-Shreve, SOKY Happenings, Nov. 2007