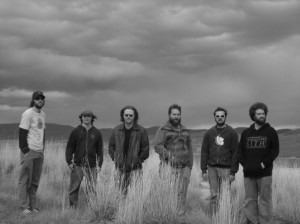 Ultraviolet Hippopotamus is a six piece rock band from Grand Rapids, Michigan whose strength in original compositions and ability in effortlessly flow from one genre to another has made them a captivating force in the midwest music scene. The energy, crowd banter and light show make this band hard to ignore. It started in the summer of ’04 when a few friends from Big Rapids, Michigan got together for a few low-key jam sessions. Before they knew it, they had established a couple of sets of music containing fun covers and even some original musings. As they tried to settle on a name for their new group, they stumbled across a story containing a fictional band with the name, Ultraviolet Hippopotamus. They felt it worked as a pefect represetation of the ridiculousness nature of the band… and so it stuck. The original collaboration of Brian Samuels, Travis Compton, Sam Guidry, Cameron Rye and Joe Phillion become the collective, Ultraviolet Hippopotamus.

Once the band had been playing for a year and developed a strong, local fanbase, it was time to give their friends and fans an album. Brian and Travis had both begun to compose original songs and they were fastly becoming as popular as the covers at the shows. So they went into the studio and layed down the tracks for their first album, Background Music. The end result was a strong collectoin of songs, which their fans were ecstatic to finally have in their hands and cd players. As the release of the album neared, Cameron decided to leave the band, so UV Hippo started looking for a replacement keyboardist. They found Nate Karnes, a Grand Rapids native who had been playing the keys for most his life and brought a welcomed change of harmonies and texture to their music. The album was released in 2006 and for the next year that followed, UV Hippo played extensively around Michigan and Indiana, working hard at honing in their sound and building upon their already loyal fanbase.

It was during this period that the band started contemplating some changes. After frequently sitting in on live perfomances, Casey Butts was brought on as a full time percussionist. His hand drums and collection of toys helped fill in the gaps to UV’s growing library of songs. As each member grew as individiual musicians, it was evident that if the band wanted to reach the next level musically they had to bring on a new guitarist. So the band decided to let go of Travis and bring in Sam’s long time friend and guitar counterpart, Russell James. It was one of the hardest decicions the band has ever had to make, considering that Travis had been with the group since its inception, but also as a friend to everyone involved.

With the new line up in place, it was time to begin work on the second album, Songs for the Reaper. Brian’s songwriting had really begun to blossom pulling ideas from his everyday life, moments with the band and lifes ideals. As the album began to take shape, the band realized that they were on to something with their ability of jumping from one genre to the next, sometimes within songs and this was how they were developing their own sound. Nate, Casey and Russ brought the musicianship up to a higher intesity, as well as bringing forth a much fuller sound. It was released in February of 08′ and the finished product was loved by fans, respected by critics and put out with pride by the band. Recoil Magazine said the album, “Will someday be a classic, if it isn’t already.”

Now that the band had a new album in hand, they decided that it was time to start hitting the midwest a lot harder. Songs like Cheshire Cat and EMD were becoming monsters during the live shows and North Coast had become an anthem for the Michigan music scene. UV started playing all over Michigan, Indiana, Illinois and Ohio throughout every weekend of the year and continued building upon their loyal regional fanbase. The band was getting tighter and developing a great relationship with their fans as well as many other bands throughout the midwest including The Ragbirds, Four Finger Five and T-Lo Effect. Members of UV were particularly attracted to T-Lo and began playing numerous shows with them. They formed a strong friendship with the keyboardist and primary songwriter of T-Lo Effect, Dave Sanders, who shared a very similar interest in musical style.

During the spring of 08′, Nate Karnes decided the upcoming summer would be his last with UV Hippo. The choice was clear to ask Dave Sanders to join the band since T-Lo Effect had been on a indefinite hiatus. So Dave began traveling with the band, learning their songs and jamming style and UV Hippo played most of their summer shows with a dual keyboard line up. With Nate’s departure at the Dunegrass Music Festival, Dave officially joined the band and had no problem stepping up into a leadership role right from the beginning. The rhythm section instantly started reworking their techniques to accompany Dave’s intricate timing. His talent was unquestionable and his style and tone started shaping a new sound for the band. The other huge benefit with the addition of Dave, was the immense catalog of songs he brought to the table. Old T-Lo songs like “Square Pegs, Round Holes” and “Run Rabbit Run”, were getting reworked and quickly becoming Hippo fan favorites.

With a year behind them with the current line up, the band decided it was time to take their sound beyond the midwest. Many of the bands friends and original fans had headed west after school. So they took their first stab in Colorado in the summer of ’08. The few shows allowed the band realize how much people appreciated UV’s style of music outside of the midwest. Before long, the band was back out there again spending a couple weeks at a time playing all over the state of Colorado, building an entirely new fanbase and honing in their sound even more so. With the success of the Colorado tours, Hippo has decided it is time to share their live shows with the rest of the country coast to coast.