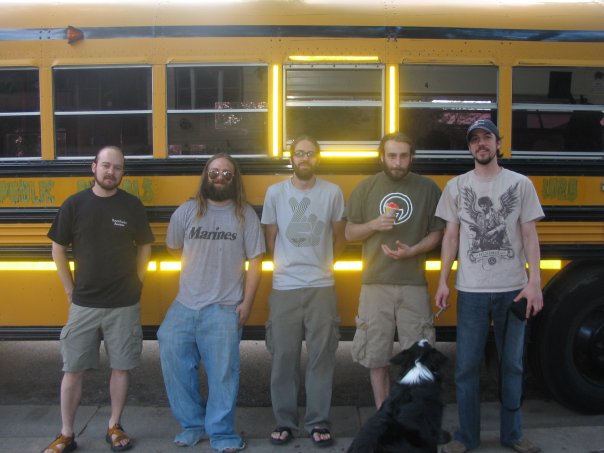 Close your eyes and feast your ears upon Yamn, a smooth sonic explosion born in the Rocky Mountains of Colorado. Four years and 100,000 road miles after they met in cold and snowy Breckenridge, Colo., the trance-fusion rockers have built a vision, a future toward which they’ll launch headfirst, no-holds-barred, with smiles and an insatiable vigor.

The band comprises Brian Hamilton (guitar, vocals), Adam Ebensberger (drums, vocals), David Duart (bass, vocals), and Ryan Ebarb (keys, guitar, vocals), a quartet from around the United States that met while fulfilling the ski bum dream in the Rocky Mountains. The band relocated to Denver in 2008 to fulfill another dream, one that shifted and evolved as they discovered their sound in the blossoming music scene on the Front Range.

Yamn is about the live experience, one that scintillates the senses with more than just tranced-out tunes and emotional peaks. That experience is one that is born off the stage, where the band’s bond is like none other. As best friends, often roommates and essentially family to one another, their greatest moments do not always happen under the lights: These are moments when the boys are able to laugh at themselves, let all the ego of the music business wash away and share in the vision of putting on epic show after epic show.

The Yamn experience does not begin and end with the guys who play the instruments either: revered fifth band member and lighting designer Paul Whitehouse plays an irreplaceable role. Knowing every note and bringing his LED light show along to every gig, Whitehouse’s talents add another dimension to the Yamn experience, a feast for the eyes to enhance the full-bodied, crisp melodies and free-flowing power rock jams that Yamn has come to be known for.

As their dedication, musicality and pure enjoyment of the scene propelled them into the Colorado jam realm, the band has shared stages and tunes with such musicians as members of String Cheese Incident, Umphrey’s McGee and the New Deal. They’ve stood under the stage lights with the Motet, Boombox, EOTO, Tea Leaf Green, Perpetual Groove, The Radiators, Steve Molitz of Particle, and more.

Yamn’s focus is on the here, the now and the what is-to-be. As they carefully write fresh new material, practice diligently and pay their dues, they look forward to the journey of filling their lives — and the lives of those listening in — with powerful and seductive sounds.