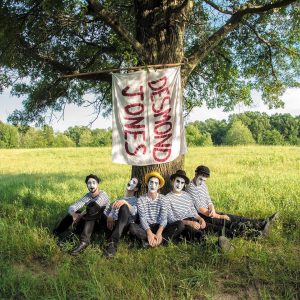 In 2012 Dirty Mike and the Boys were hired for beer to play at what would be the most epic end-of-the-year party in recent Michigan State University history. A few parties, Craigslist ads, and rehearsals in Bota’s basement later, Desmond Jones was formed and has been playing around the country and eating at the finest diners in the Midwest ever since.

With a catalog of 60+ original songs, Desmond Jones has performed over 500 shows across the country, sharing the stage with bands like Papadosio, Dopapod, EOTO, The Werks, The Main Squeeze, Here Come the Mummies and many more. Their self-titled debut album “Desmond Jones” is available now on all platforms.
For booking info contact: [email protected]
MUSIC: www.desmondjones.bandcamp.com

Frizzle Fried was originated by Paul and Lance in a dark dingy basement in “Eastown” after a night of debauchery in the fall of 2008.

iLLPHONiCS is more than a band, it’s an identity. All five individuals in the band are founding members, and since 2006, they’ve consistently made some of the most groundbreaking music that has come out of the Midwest. From Mound City (St. Louis, MO), iLLPHONiCS is one of the few bands that can tastefully blend rap vocals with strong musical composition and live performance.

It’s the hybrid of different musical styles and cultures that makes iLLPHONiCS such an undeniable force. With the kind of energy that can keep a crowd moving, iLLPHONiCS has the power to hold an audience’s attention from the first note until the last.

Having shared the stage with artists like the Roots, RJD2, and Lupe Fiasco, as well as performing at numerous festivals, including Wakarusa, iLLPHONiCS are ready to connect with listeners as diverse as their sound.

Through discipline, practice & study KUNG FU has sought excellence in the art of improvised dance music. Schooled by the masters, The Headhunters, Weather Report, Mahavishnu Orchestra and Frank Zappa, the quintet of masterfully seasoned musicians blends electro-jazz-funk with an EDM informed danceability at the highest level of skill & inspiration nightly. The resulting “NU-SION” is “captivating”, “explosive”, “jaw-dropping” and “musically mesmerizing. Prepare yourselves for a devastating, LETHAL FUNK to be rained down on you by a BAD-ASS BLACK-BELT BACKBEAT. For the uninitiated, the experience is typically shocking yet the focus is simple: ENTER THE DRAGON!