As Halloween grows closer we invite you to bring your best costume, ushering in the madness with a contest and a variety of talented performers including: 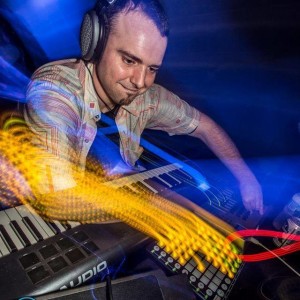 You're about to embark on a very exciting adventure.
A journey which along the way will bring to you new color, new dimension and a new experience. Let your minds eye go wild.

From an invisible source comes blunted breaks, deep bass, ethnic elements from around the world, lush keyboards,warm brass and samples from the caverns of yore...

Born in Uqbar, later moving to Broad Ripple in Indianapolis at the age of 3, Jin-XS spent much of his youth and teens in the rave, industrial, and hip hop undergrounds, but his work as a DJ began 1999 in Denver, when a cousin taught him the ins and outs of using DJ equipment. Around this time he also began teaching himself a variety of music software. By 2003, he had begun his work with instrumental production and mastering the art of DJing itself, and continues to the present, spinning an eclectic mix of genres in some of Indianapolis' biggest music venues. In 2009 he opened for "End:The DJ," the #1 Industrial DJ in the world, at Gencon. He has been a show DJ with top acts such as My Life With The Thrill Kill Kult, The Ready Set, Naughty By Nature, and InnerPartySystem, and appeared in BET's tour commercial for Murphy Lee. Currently is a part of the G9 Collective, IndyMojo's DJ crew.