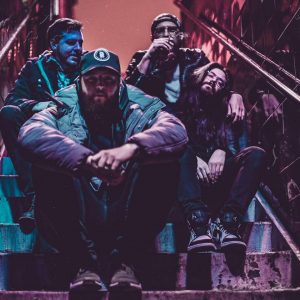 The Meridian City is very quickly taking over Indiana. Catchy songs & an intense live show experience are just a couple things that make TMC special. See for yourselves and come join us on #TheComeUp. 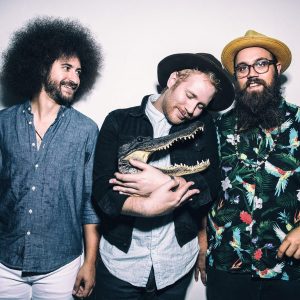 Rooted in the rowdy spirit of rock & roll, Wild Adriatic has built an international audience on a combination of groove, grit, and guitar-heavy swagger.

Whittled into sharp shape by a touring schedule that’s kept them busy for roughly 250 days a year — including several European tours, countless stateside runs, and appearances at festivals like Bonnaroo & Mountain Jam — the band continues to place an emphasis on evolution.

2019 being their 8th year as a band, lifelong friends and the three core members of Wild Adriatic (Rich Derbyshire, Travis Gray, and Mateo Vosganian) decided it was time for some fresh perspective. The addition of keyboardist Scott Hannay has added even more depth & dimension to the band’s expansive rock & soul filled sound.
Bursting into the year with the brand new collaboration EP release of Adriatic/Rodriguez and a month-long tour supporting their musical partners-in-crime Andy Frasco & the UN set the stage for what will continue to be another busy year.

Adriatic/Rodriguez released in February 2019 and was born of a late-night drunken conversation between drummer Mateo Vosganian and Minneapolis-based singer/songwriter Dan Rodriguez. Having Crossed paths many times over at festivals around the country and “just, like, totally vibing dude,” the two acts convened for a 3 day writing retreat in Upstate NY. The five song EP came about effortlessly and songs like “Don’t Hold Back” and “Party” exemplify the spirit & intent of Wild Adriatic.

“We’re silly weirdos living out our childhood fantasy and we feel so lucky to able to continue chasing the dream,” says drummer Mateo Vosganian. Singer and guitarist Travis Gray agrees, saying that the goal is ultimately to continue to celebrate the electricity and elation of playing in a traveling band.

“We love this,” he adds. “We’re just normal dudes who are lucky to be supported by fans who buy tickets and come out to shows, and we like to hang out with them. We aren’t trying to take ourselves too seriously. We’re trying to connect. We’re trying to feel.”

With plenty of new songs and dance-party inciting jams, the newly rounded out touring line-up of Wild A brings with it the next level of the explosive & fun live performance that gained them early acclaim from outlets like Rolling Stone, USA Today, and the Huffington Post.

Wild Adriatic hits the road with Lynyrd Skynyrd again in Summer 2019 as part of the legendary band’s farewell tour and festival season finds the band traipsing across the United States several times over. 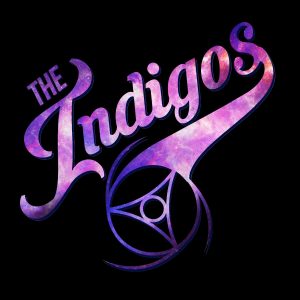 The Indigos is an Indigroove rock band from Muncie, IN. They originated from a recording project lead by Producer Patrick Weaver who asked lead singer and songwriter Matt Mellen to record one of his songs titled “In Eternity”. During the session Patrick introduced Matt to drummer and songwriter Matas Olsauskas. After a 3-hour studio session they decided to start a band with accompanying guitarist Brandon Brookshear.

Over the next year the band recruited, rehearsed, and performed under the name I, The Indigo. After going through almost a dozen musicians they solidified their ensemble of 8 members, including keyboard, multiple vocalist, and a full horn section. The Indigos style combines the music of rock, indie, modern pop, jazz, groove, alternative, and blues music. Their sound continues to evolve as the band and members themselves evolve.

The name The Indigos comes from the idea of being Indigo, or those from a generation who are more in touch with their higher selves. They are able to identify their dreams and desires, pursue, and then help others do the same. We always strive to spread the joy of music and love wherever we go, and include all of those who want to be apart of this amazing experience.

We like to say our genre is “Indigroove” because of its groovy roots meshed with our collective rock ‘n’ roll influences. Already the size of a baseball team and working on becoming a football team, we have depth of diversity with a central focus on creating our unique brand of music so that our fans can get in, get in the groove.

Jerry Joseph and The Jackmormons 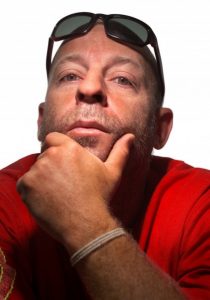 For more than 30 years, Jerry Joseph has been strapping on a guitar and chasing down truth, understanding and soul with a tenacity and resonant skill that mark him as a hard charging kindred spirit to Joe Strummer, Warren Zevon and Patti Smith. While not a household name or critic’s darling, Joseph is the archetypal musician’s musician, something resoundingly clear in his live performances, as well as his studio work.

Joseph first came to prominence in the mid-1980s with still-beloved cult band Little Women, a reggae-rock proto-jam band that dominated the Rocky Mountain club scene for nearly a decade, and notably helped break jam giants Widespread Panic, who looked up to Joseph and opened for his band before rising to prominence. In fact, Joseph wrote many of Panic’s favorite concert staples, including such blazing epics as North, Chainsaw City and Climb to Safety.

Steve Drizos and Steve James Wright are also musical lifers working steadily for decades both as sparring partners to Jerry Joseph and elsewhere. Drizos was a member of acoustic Dexter Grove from 1995-2004, a band that performed over 1,500 shows nationally. Drizos produced the live Jackmormons record Badlandia and co-produced Happy Book, as well as performing and recording with such luminaries as Dave Mason and Jim Capaldi (of Traffic), Widespread Panic, The Decemberists, moe., Merle Saunders, Eric McFadden, and dozens of local Portland artists.

Steve James Wright has been a complement to Joseph since almost Day One, as the guitarist for Little Women and an outstanding player in his own right. After taking some time off, James graciously and expertly moved over to bass to bring back a slinkier, funkier and more psychedelic mood to the Jackmormons sound. His deep knowledge of the material and his more melodic style now combine to challenge the band to find its finest grooves.

The more recent addition of young stud guitar player/singer/songwriter Jeff Crosby (Jeff Crosby & The Refugees) has proved another prescient move by Joseph. A couple of Crosby’s songs from the 2013 album, Silent Conversations, were featured on the hit FX series, Sons of Anarchy. Crosby helps brings out the Americana sensibility of the Jackmormons sound, and his crisp guitar work proves an admirable counterpart to Joseph’s open-minded approach. And a Crosby tune or 2 has become a welcome part of a Jackmormons’ set.

Joseph’s influences are many and varied. “Columbia Record Club used to have 20 records for a penny and I filled out form after form, and these boxes of records came to my house and my parents would flip out. Those were my influences,” says Joseph. “I was a kid, so I was as into The Monkees as I was The Beatles. Then, my mother would tell you, it was all over on my 9th or 10th birthday with [Black Sabbath’s] Master of Reality and Steppenwolf Live. Then at 12, it was jazz. I saw every jazz act that toured in the 70s…Herbie Hancock and Tower of Power after we went to see Steely Dan. All that and then my older babysitter bought me Exile on Main Street and I saw [Bob Marley and] The Wailers in 1976 and moved to New Zealand. And then The Clash came out and changed my life. But I also loved ZZ Top and all those guitar bands. When I lived in New Zealand, I sat in my window and read Lord of the Rings while listening to prog like Gentle Giant and Camel. Later, I learned a lot from Chris Whitley touring around Europe with him.”

Despite the sort of roadblocks and turns of fortune that usually crush most musicians, Joseph survives, and in fact, thrives in a way that’s heartening and stirring, as anyone who has seen a live show can testify.

“I’m lucky. I work. I’ve never had to play in a cover band. I’ve never had to wear a funny hat, “ says Joseph. “Perhaps because of the lack of traditional success, I’ve put out about a record a year, plus all the stuff that’s never come out, and it’s kept me creatively honest. I don’t rehash my past. I don’t repeat any of my old hits because I don’t have any big hits.”

No Pit Cherries is an alternative rock band from Indianapolis, IN, and was recently described as “a genre bending indie rock band, with a classic veneer.” – Wayne Bertsch, Nuvo (Barfly). Comprised of four talented musicians who all owe their roots to the Indianapolis local music scene, No Pit Cherries is dedicated to making great music, and connecting with listeners in a powerful way. Each person brings something different to the band giving No Pit Cherries a unique and memorable sound. A No Pit Cherries concert is a Rock & Roll show with good vibes, and palpable energy.

Rocky’s interest in music began at an early age, being surrounded by a musical family made her curiosity grow, and at the age of eight she began teach herself to play the drum set. At twelve, she joined the band at Decauter Central Township Schools where she learned to play percussion, as well as many different styles of music. Rocky is a versatile drummer with her main focus in Jazz. Alicia always looked up to jazz drummers, like Gene Krupa, Mel Lewis, and Buddy Rich. She has a love for Rock music, as well. Her influnces include bands, like Led Zepplien, The Who, Nirvana, Red Hot Chili Peppers, and No Doubt.

Aaron grew up in the shadow of the grunge era, and began teaching himself to play guitar at the age of thirteen with musical influences ranging from Neil Young and Duane Allman, to Eric Clapton and Jimmy Page, as well as popular groups like Pearl Jam, Nirvana, and Alice In Chains. Having played in Folk, Blues, Rock, Jazz, Gospel, and many other groups; with many live performances, as well as being featured on several studio projects, Aaron has developed a distinct and eclectic style of play that is both unique and exceptional.

Seth has been performing musically all his life. He started by singing in his parents church choir at the age of eight where he fell in love with music; from there he began sitting in on his family’s Saturday night music group while they sat in a circle and played old country songs, this invoked his desire to pick up the guitar, which he started playing at the age of sixteen. Mixing his country and bluegrass roots with his love of blues and rock & roll Seth has developed a unique sound and style of playing, and singing.

Kevin Boynton is the largest member of No Pit Cherries, giving him the nickname “Jumbo.” He was given his first bass six years ago and started really focusing on that instrument during his college years. He is a self-taught musician and works hard in his spare time to try and learn more about music. Kevin has an eclectic playing style influenced by some punk roots, ska, funk and rock. Some of his favorite bands are Anti-flag, Blink 182, and the Red Hot Chili Peppers.

The Mainstays are an original funk n roll band based in Kalamazoo, MI. Featuring Andrew Schrock (singer/songwriter), Dutch Conway (bass), and Nate Heymoss (guitar) of Michigan’s funk/dance band Funktion, the band draws heavily from the groovy elements that made Funktion a bonafide dance party, while crafting dynamic, insightful, and almost folk-influenced songs. Half-beast/Half-man Paul Bauer behind the drum kit and the downright dirty playing of Tom McRockin Eldred (BMF Band) on keys bring the sound fully together, and provide that elusive answer to your missed connection.