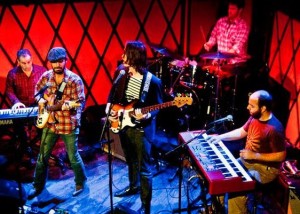 2015 is shaping up to be a monumental year for Philadelphia-based musician Tom Hamilton, whose American Babies have returned to the studio to record their latest LP; a follow-up to 2013’s Knives and Teeth.

Invigorated by a busy and exciting 2014 that found him on the road with a number of touring acts, Hamilton can be considered “the hardest working person in show business,” and looks forward to funneling that creative energy into American Babies’ newest studio effort. “Everything that’s happened since October 2013 has been surreal,” says Hamilton, “the reception of Knives and Teeth was overwhelming. The tours throughout 2014 were all so fun and exciting. And then there were the incredible opportunities that arose playing with Joe Russo’s Almost Dead, Phil Lesh, and Bill Kreutzmann, as well as reuniting with Clay Parnell on stage, which all had a huge influence on the narrative of my year. I’m excited to lock myself back in the studio and see how all of these events and new experiences shape the next batch of songs.”

Although American Babies began as a side project for Tom Hamilton with a rotating cast of musicians, the lineup has recently solidified to include Hamilton’s longtime partner-in-crime bassist Clay Parnell (Particle, Brothers Past), keyboardist Adam Flicker (The Brakes), drummer Al Smith, and rhythm guitarist Justin Mazer. With American Babies, Hamilton has turned his focus to songwriting and crafting lyrics that share tales of trials and tribulations ranging from working class hard truths and political chaos to personal relationships gone sour.

Fearlessly blending a passion for songwriting with the electronica-based improv rock that Hamilton and Parnell developed with Brothers Past, American Babies are pioneering a new sound — fusing serious songs with an open-ended sense of adventure that encourages full-group improvisation in the live setting.