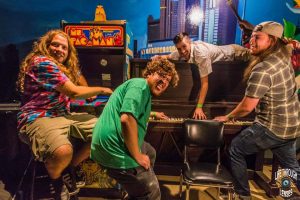 Electric Orange Peel began as five friends jamming together in original Rhythm guitarist Nick Hampton’s basement. It didn’t take long for the band to realize that they had a special kind of chemistry together, and they almost immediately began playing shows around their hometown of Columbus, OH.

Word of EOP spread quickly throughout the Ohio music scene, with the band earning slots at Summer Camp and The Werk Out Music Festivals (among many others) in just their first year together.

Eventually Hampton left the band to move out West, and the newly made four-piece (Dylan Aughe, Marko Manastyrskyj, Ryan Bertani, and Austin Crumrine) began writing, practicing, and touring harder than ever. While constantly growing their fan-base in their home market, the boys began to branch out to neighboring States and cities to expand the reach of the Peel.

Now in their fourth year together, Electric Orange Peel is going stronger than ever. With an ever-growing catalog of original music, EOP decided to hit the studio last Winter to record their debut album, “Seed,” which they released on June 30, 2017. Now hitting the road again hard for the Spring and Summer tours, Electric Orange Peel is currently riding a massive wave of momentum, and show no signs of stopping anytime soon.