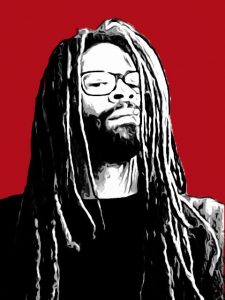 From the inception of the Birdmen of Alcatraz, to the pre-super stardom scribble jam battles against greats such as Eminem, to the decade long takeover of the Indianapolis Hip-Hop scene by The Mudkids, to the present day where the name Rusty Redenbacher can be heard on WTLC, seen on IMC TV, and deciphered in blog and viral posts felt around the world, the founding member of The Mudkids, Lazarus, and Tornado Alley #ATFU.

Whether it be the thousands of albums Rusty has sold as the head of The Mudkids, the fan admiration and communal support that constantly has voted him as Indy’s Top Artist, the large quantity of free music Rusty had given away to the masses while introducing his #ATFU movement or the vast experiences gained while performing alongside legends including the Wu-Tang Clan, The Roots, Dead Prez, Blackalicious, Atmosphere, and more, one thing that is for certain, legions of Hip-Hop, Rock, Funk, Reggae, and Dubstep fans alike are ready to embrace Rusty.